HomeThe ShuffleCan the Bills Top the Patriots on TNF?

Can the Bills Top the Patriots on TNF?

December football kicks off in the northeast on Thursday night when the New England Patriots host the Buffalo Bills.

The AFC East has been one of the NFL’s most competitive divisions this season, as all teams are within just a couple games of each other heading into Week 13.

This week will begin with a very important AFC matchup as the first place Buffalo Bills (8-3) remain on the road to take on the last place New England Patriots (6-5). Lots of playoff implications are at stake in this one, so here are some things to consider when looking to place your bets.

It’s no secret that the Bills passing attack is elite, ranking third in the NFL with an average of 279.2 yards per game behind franchise quarterback Josh Allen. Unfortunately, the Patriots secondary does not allow teams to pass all over them like the Bills want to. New England is ninth in the league with just 198.5 yards per game allowed through the air.

Buffalo also runs for 136.7 yards a game, good for eighth-best in the NFL. Most of its rushing production also comes from Allen. The Pats defense, however, is also strong against the run game.

New England is also ninth in rushing yards per game, allowing just 109.3. However Buffalo decides to attack the New England defense, offense won’t come easy in this one. It’s like game planning to defend Michael Jordan. You can’t stop them, you can only hope to slow them down, and the Pats aim to do just that this Thursday.

Patriots Must Have Solid Passing Game 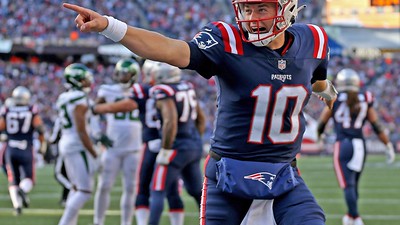 While the Patriots defense tries to slow the Bills offense down, its offense will be doing its best to keep up. Running the ball might not come easy, though. The Pats are just 23rd in the league with 109 yards rushing per game.

Compare that with the Bills defense, which is seventh-best in the league with an average of 105.6 yards allowed per game. Between this mismatch and the fact that New England may spend a solid amount of time in this game playing from behind, expect their rushing totals to stay safely in the double digits.

When it comes to the passing game, the Patriots find themselves in a more doable matchup. They have been establishing their passing game rather effectively as of late and now are up to 19th in the league with 216.9 yards per game in the air.

In this one they will square off against the evenly-ranked 19th-best secondary, as Buffalo has allowed 221.6 passing yards per game. As mentioned above New England may be playing with a deficit and would therefore need to throw the ball more, so they can be expected to have a solid day through the air.

Both teams have lost to Minnesota and played close games with the Jets in that stretch as well. The Bills lost by a field goal to the Jets while the Patriots beat them twice, by five and then seven. All signs point to a close contest in this one.

The teams are playing at an extremely similar level right now, down to the just-mentioned common opponents. Both teams have been playing in close games, and this is an extremely important late-season division matchup. Not to mention, New England is home. I think Buffalo with escape with a victory, but it will be by a small margin. New England should cover the four points at home and might even pull out a crucial victory in prime time.

The Bills love to score points and the Patriots will have to do the same to hang around in this one. The Pats should have enough success through the air to challenge Buffalo and both teams seem likely to struggle running the ball. These are indications of an Over game, and at 43.5 this is a very realistic line to cover.

Prediction: Patriots +4 against Bills (-107 at Unibet)