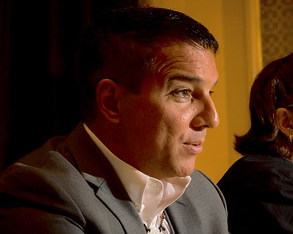 The Catawba Indian Nation of South Carolina is seeking to build a casino resort in Kings Mountain, North Carolina. But gaming in that state is the domain of the Eastern Band of Cherokee Indians, led by Chief Richard Sneed (l.).

The Eastern Band of Cherokee Indians in North Carolina and the Catawba Indian Nation in South Carolina have a long history of fighting each other for survival. The battle continues today as the 3,400-member, financially struggling Catawbas seek to open a casino in Kings Mountain, North Carolina, 30 miles northwest of their reservation in Rock Hill. The Cherokee also claim the area as part of their ancestral lands.

Principal Chief Richard Sneed said tribal members receive two distributions for a total of $12,000 from resort revenue every year. Over the years, casino revenue has financed an $83 million hospital, affordable housing, healthcare supplements, a Cherokee language-immersion academy for tribal children and a K-12 school system as well as cultural attractions.

Catawba Chief Bill Harris said the South Carolina tribe’s poverty rate stands at 23 percent, 11 points above the national average. “We haven’t prospered. To grow, we need our own source of economic development,” he said—like a casino in Kings Mountain, located about 30 miles from Raleigh.

Although the tribe is based in South Carolina, “We have an ancestral right to be here. The borders we recognize in 2020 are not the borders of the Revolutionary War or earlier,” Harris said. The tribe tried twice, unsuccessfully, to open a gambling resort on its South Carolina reservation.

Kings Mountain Mayor Scott Neisler said having a Catawba casino resort in the town “would be a real shot in the arm.” A recent economic impact study estimated the venue would generate more than $350 million annually and create 4,000 jobs, plus lead to a tribal school, healthcare and more.

The Cherokee have strongly opposed the Catawbas’ efforts. They also claim Kings Mountain as ancestral land. Sneed said his tribe especially is concerned with how the Catawbas are trying to move forward. The Indian Gaming Regulatory Act has strict rules regarding land being taken into federal trust for the purposes of gambling. However, in March 2019, Senators Lindsey Graham of South Carolina and Thom Tillis and Richard Burr of North Carolina submitted legislation calling for a Catawba casino in Kings Mountain, exempting the tribe from paying for environmental impact studies, receiving the North Carolina governor’s approval and other rules.

Graham said, “The Catawba Nation has been treated unfairly by the federal government, and our legislation rights that wrong. I hope this legislation will be quickly passed through the Congress and signed into law so we can once and for all bring resolution to this issue.”

But North Carolina state Rep. Mark Walker said, “Instead of going through the proper channels with state and local officials in North Carolina, this casino is trying to circumvent the traditional process.” Sneed concurred, stating, “No other tribe has received this sort of treatment. We all have to play by the rules.”

Sneed naturally is concerned that a Catawba casino would steal some of the tourists who currently drivel up I-85 to Harrah’s Cherokee to gamble. The degree to which it will impact the resort, no one knows. But Harris said, “Greed should not be the thing that says, ‘You aren’t entitled to it.’”

Sneed noted the developer of the proposed Catawba casino is Wallace Cheves, who, according to the Charlotte Observer, has donated almost $50,000 to the three senators sponsoring the casino bill since 2015. He also co-chaired Graham’s 2016 presidential campaign. Cheves has had interests in a video-poker company, a sweepstakes company and riverboat gambling. Sneed said Cheves is “a bad actor,” with several lawsuits and at least one government raid during his career.

But the Cherokee aren’t innocent bystanders. The tribe’s political action committee is the largest and most influential in North Carolina. It spent $135,000 on lobbyists in Raleigh last year and donated $162,000 to Democratic and Republican political campaigns. The Cherokee convinced 38 out of 50 state senators to sign a letter to the U.S. Indian Affairs Committee opposing a Catawba casino. North Carolina Governor Roy Cooper also has expressed opposition.

It’s not clear when the U.S. Department of the Interior will rule on the Catawbas’ off-reservation casino in Kings Mountain. Even if the Catawba casino is approved, it’s sure to be contested in court. If it’s not, Harris said, “I don’t know any other card I have to play.”