Cash-Strapped Casinos Get Creative to Get Coin 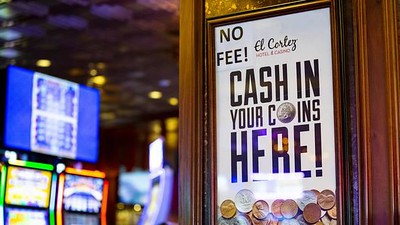 Coin-operated slots are few and far between, but the nationwide coin shortage is still a problem for casinos, which must cash out TITO vouchers and give change at restaurants. Casinos like the D and El Cortez in Las Vegas have found novel ways to deal with it.

In the olden days, gamblers would drop quarters, dimes and nickels into slot machines, and also be paid in coins. In that era, one of the happiest sounds in a casino was the shower of quarters that signified a win.

These days, players are more likely to shove $10 or $20 bills into slot-machine bill acceptors, receive credits equal to the cash, and when they’re done, get a ticket for the value of anything left.

But a few casinos like the El Cortez and the D, both in Las Vegas, still accept coins in some manner. And for them, the coin shortage triggered by the coronavirus pandemic has created plenty of inconvenience.

Built in 1941, before Bugsy Siegel invented the modern Las Vegas, the El Cortez Hotel & Casino has kept those old-style coin games going—113 of them, to be exact.

“Many of the same players who came in the ’70s and ’80s still come to play their old favorites,” El Cortez General Manager Adam Wiesberg told GGB News. Coin games, he added, have nostalgic appeal for older adults, and retro appeal for younger patrons. “Now, people come from all demographics to play the coin games and the experience we’ve been able to maintain.”

The El Cortez team first learned about the coin shortage when staff ordered $30,000 in quarters from the bank, and a Brink’s truck showed up with just $500. “We assumed it was a mistake at the time,” Wiesberg said. “But of course, it was not.”

Those coin levels are adequate for a normal economy, but these days, “the slower pace of circulation has meant that sufficient quantities of coins are sometimes not readily available where needed,” the mint said in a news release.

Luckily, El Cortez maintained a surplus of coins in its vault, which helped it weather the predicament. The casino took further steps to ease the problem, eliminating a 5 percent fee on mixed coins (quarters mixed with dimes and pennies) that was collected when patrons used one of its coin-counting machines. Eliminating the fee motivated more people to use the machines, which put more coins in circulation.

It “made a big difference,” said Wiesberg, who recently told the Las Vegas Sun that the casino must now empty those machines daily, and over the course of a weekend, they can yield up to $75,000 in coins.

The casino also emptied its CoinMax machines more frequently, so coins would be recycled through the system more efficiently. “These changes, along with our reserves, have allowed us to function normally, and we don’t see any issues keeping up going forward,” Wiesberg said.

Meanwhile, the U.S. Mint has been operating at full production capacity since mid-June, and minted almost 1.6 billion coins in that month. It’s on track to produce 1.65 billion coins per month for the remainder of the year—more than the 1 billion average for 2019.

Resorts Casino Hotel in Atlantic City has no coin slots, but its shops and restaurants are experiencing a minor coin shortage, said President and CEO, Mark Giannantonio. “To offset a coin shortage issue, the hotel encourages employees to cash in their change from home,” Giannantonio said.

“Although we’re providing currency to guests that take a ticket to the self-serve cash units for their payouts, we’re not dispensing coins from these machines at this time,” said Four Winds CFO Dan Weindruch. “Coin balances remain on guests’ tickets, which they can use for play in the future.”

Tickets can be redeemed at the cage and guests will receive coins in return, he added, “But because of the proactive measures we took, the coin shortage has not affected our restaurants and non-gaming areas. We’ve been able to accommodate all transactions, including cash transactions, without issue.”

Hard Rock Hotel & Casino Sacramento at Fire Mountain in Wheatland, California, hosts yet another coinless casino floor, with a ticket in-ticket out system.

“We only redeem coin from tickets or at the cage,” said Mark Birtha, president of the property. “We do provide coin via employee banks/cashiers in our dining and retail outlets for cash transactions. But we’re not experiencing any shortages for the moment.”

Back in Las Vegas, the D on Fremont Street operates 10 machines on the horseracing game, Sigma Derby.

“This is one of our most popular games, and they’re all coin-operated,” said Allen Randal, D’s director of slots. “While the shortage has affected all denominations, the Derby needing quarters caused the most pain. For a long time, we simply couldn’t get enough coin.”

The problem mostly affected voucher redemption, which caused the property to make adjustments. “One of the best things we’ve done is our ’Save the Derby’ campaign. If a guest brings in one pound of quarters ($10), they get a unique hat. At three pounds, they get a hat and a shirt. This has been a surprisingly strong campaign. It’s amazing how passionate people get when it comes to the Sigma Derby,” Randal said.

“We ask that the American public start spending their coins, depositing them or exchanging them for currency at financial institutions or taking them to a coin redemption kiosk,” the mint said in a statement.