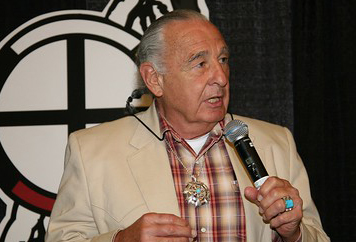 Like commercial casinos nationwide, tribal casinos had to shut down in early spring on the heels of the Covid-19 pandemic. Former Senator Ben Nighthorse Campbell (l.) says the loss of revenue between mid-April and mid-October when most of them reopened took terrible toll on revenues to fund health care and other services.

In March, 524 tribal casinos operated in the U.S. The number fell to zero by mid-April due to closures forced by the coronavirus pandemic. The first ones reopened in early May but it was a long road back. As of October 12, 470 were back in business, according to the American Gaming Association.

In the intervening months when the casinos were shut down, tribal communities suffered a devastating blow.

The loss of revenue, especially from casinos forced to close for all those months, is disastrous for the health and well-being of tribal communities. Revenues fund essential tribal services including health care, schools, child and elder care.

“In an effort to help stop the spread of the virus, Indian nations suspended gaming, closed our hotels and all of our ancillary businesses in the first and second quarters of 2020. When tribal governments reopened our gaming, hospitality and tribal business in May and June, capacity was generally limited to 50 percent to allow social distancing. Masks and temperature checks are required for both employees and patrons. Conventions, concerts, and events are cancelled.”

“Due to the pandemic, tribal government revenues will be down by $40 billion,” Stevens and Campbell said in the article.

Tribes have the ability to levy some taxes, but the governments that get to levy taxes tend to be state and county governments. “So tribes are kind of boxed out, and they have to earn revenue for governmental operations from other kinds of things like businesses,” said Dr. Miriam Jorgensen, research director for the Native Nations Institute at the University of Arizona.

Jorgensen, who is also the research director for the Harvard Project on American Indian Economic Development, added: “When those businesses are not able to generate any net revenues because they’re not able to be open, tribes really don’t have the flexibility they need to respond to public health crises.”

Native American patients are funded at $9,100 less per patient per year than Medicaid patients. “On Indian lands, we lack infrastructure: some remote homes do not have indoor plumbing. It’s hard for our Native families to wash hands without running water. Federal help is an essential lifeline,” said Stevens and Campbell.

The Indian Health Service, the most important source of healthcare for Indian Country, is usually funded at between 50 percent and 60 percent of need, according to the National Council of Urban Indian Health. Sometimes, the agency runs out of money in the middle of the fiscal year, which can force patients to forgo basic or serious healthcare, according to the Washington Examiner.

The lack of funding also creates worker shortages. Staffing is 20 percent lower than what the IHS recommends.

Casinos, even those that have gradually started to reopen, have not brought in the same revenue as in previous years that could have given tribes better odds of preventing severe Covid-19 outbreaks. Tribes are increasingly dipping into public coffers to fund public health services, Jorgensen said.

In March, Congress passed the CARES Act, which allocated $8 billion to tribal governments to respond to the pandemic and assist the public health system. Failed negotiations between Democrats and White House officials on another round of coronavirus relief mean that there will be no extension of the December 30, 2020 deadline to spend CARES Act funding.