Casinos Are Back, But Are They Making Money? 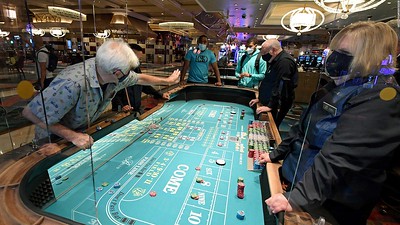 Business has been better than anticipated at Nevada casinos, which reopened June 4 at half-capacity. But high rollers are largely absent, and conventioneers are nowhere in sight. Locals casinos seem to be doing very well, and tribal casinos are also welcoming large crowds.

In Nevada, gaming revenues have been surprisingly robust since casinos reopened June 4, following a three-month closure due to Covid-19. One caveat: these customers seem to be primarily locals and Californians who are driving in to Nevada.

Mike Lawton, senior research analyst at the Nevada Gaming Control Board, pointed out that two key demographics are missing. “There’s not a lot of high-end play,” he said. “And the big piece missing is that convention business, that corporate customer.”

Reno, Carson City and Lake Tahoe are down by less than 20 percent, he said, although 90 percent of the gaming businesses have now reopened, with the remainder expected to be operating by the July 4th holiday. About 59,000 slots, 2,020 table games and 186 card games are currently open in the state. Casino restaurants and the casino floors are limited to 50 percent capacity. There is no such rule for hotel rooms.

Caesars Entertainment estimates that revenues for the first week of casino reopenings in Nevada came in about 58 percent below the same period last year. The preliminary results for June 4-10 were released in a filing in conjunction with balance sheet-boosting moves announced by Eldorado Resorts ahead of its $17.3 billion acquisition of Caesars, which is expected to close in July.

The five properties in the filing𑁋Caesars Palace, the Flamingo Las Vegas, Harrah’s Las Vegas, the Linq casino and Linq Promenade and Harrah’s Lake Tahoe𑁋generated operating income that was down between 110 percent and 120 percent versus last year. Adjusted cash flow was down 70 percent to 80 percent.

All five properties are operating under state-mandated restrictions on slots and table games, a 50 percent limit on capacity and with no live entertainment.

Six regional casinos Caesars casinos reopened beginning May 18: Harrah’s Bossier City and Harrah’s Louisiana Downs in Louisiana, Harrah’s Gulf Coast and Horseshoe Tunica in Mississippi, Horseshoe Council Bluffs in Iowa and Harrah’s North Kansas City in Missouri. Revenues there were either flat or up slightly against last year. On a more promising note, operating income at the six increased by 60 percent to 70 percent, while adjusted cash flow was up 35 percent to 40 percent.

The numbers are sparse for now, but continue to file in. In Arkansas, for example, casinos reopened May 18 at one-third capacity with limited gaming options. The Arkansas Racing Commission released revenue figures from May 18 through May 31, and based on slots only, the data show Oaklawn Racing Casino Resort in Hot Springs posted $52.6 million in wagers and a $4.6 million house win before taxes, compared to $157.4 in wagers in February.

For the 14-day period in May, Southland Park Gaming and Racing in West Memphis posted $92.1 million in slots wagers and $7.2 million in house win, compared to $303.4 million in wagers in February.

Still, daily wagers placed in May exceeded 33 percent of daily average in February, with 47 percent at Saracen, 63 percent at Southland and 69 percent at Oaklawn.

The numbers are similar to those from March, when casinos closed March 17 and revenue fell 58 percent from $23.6 million in 2019 to $10 million.

However, Louisiana Casino Association Executive Director Wade Duty said the two-week May results were encouraging, since the volume of gamblers was down only 13 percent compared to the same period in May 2019. “Turnout was greater than what we were expecting. Understandably, folks are cautious,” he said, “but the casinos are trying to balance a lot of regulatory and health care concerns.”

Most riverboat casinos, racinos and video poker parlors reopened at 25 percent capacity on May 18. Harrah’s New Orleans reopened Saturday, June 13. For the 13-day reopening period in May, Baton Rouge’s riverboat casinos generated $7.5 million, or 36 percent of the $20.6 million they posted for the full month of May 2019.

The Lake Charles market posted the smallest decrease in Louisiana, with revenue down 56.9 percent. Revenue at the market’s three riverboat casinos and the slots at Delta Downs fell from $77.8 million to $33.5 million in May.

The May 2019 revenue figures also included the Diamond Jacks riverboat casino in Bossier City, which announced it would permanently close due to the impact of the pandemic.

While no tribal casinos reveal their revenue numbers this quickly, anecdotal evidence indicates that the casinos in California, Arizona and the northwest have welcomed good crowds, albeit smaller numbers than normal. The tribes are using the same health and safety stipulations found at commercial casinos. Most California casinos are requiring masks.

Kentucky-based Churchill Downs’ properties in five states began reopening on Friday, June 12, bringing seven of the company’s 10 gaming properties back into operation. Chief Executive Officer Bill Carstanjen said, “We are grateful to our teams who have ensured smooth, safe and successful reopenings over the past month and to our returning guests who have enthusiastically adapted to new protocols

First to reopen were Calder Casino in Miami Gardens, Florida and Lady Luck Casino Nemacolin in Pennsylvania, followed by the Fair Grounds Racecourse & Slots in New Orleans; the company’s 12 off-track betting locations in Louisiana reopened on May 18. Ocean Downs Casino in Maryland and Miami Valley Gaming in Ohio reopened June 19.

Overall, Fitch Ratings Services is predicting that full recovery from the Covid-19 crisis for the casino/hospitality industry will not happen until 2023 at the earliest.

In a statement published by CDC Gaming Reports, Fitch gaming analyst Alex Bumazhny said it will be 2023 before the casino industry completes what he called a “U-shaped” recovery, regaining revenue and cash flow levels seen before the Covid-19 crisis. Bumazhny predicted a 30 percent drop in revenues for regional markets in 2020, and 45 percent for the Las Vegas Strip.

“Generally, Fitch is forecasting a roughly three-year recovery to pre-pandemic levels for the gaming sector,” Bumazhny said in the statement. “Recovery will be the slowest on the Strip, given its greater reliance on inbound visitation, air capacity, and conventions. Regionals are less cyclical than Las Vegas and should recover quicker, as they have mostly local, drive-in visitation.”

The statement follows a June 11 report from Fitch Ratings on the hotel sector, which it predicts will see a revenue decline of 60 percent per available room (RevPAR) in Europe in 2020, and no recovery to pre-crisis levels until at least 2023. It also predicts the leisure travel, regional areas and budget hotel categories to rebound faster than the business travel, urban destinations and upscale categories.

Meanwhile, consultancy H2 Gambling Capital has downgraded its prediction on the cumulative effect of the pandemic on the global gaming sector for this year, reporting likely revenues of $362 billion, which is lower than the figure for 2011.

“The gambling sector has been hit harder than most, or at least significantly harder than the current IMF GDP expectations, as its share of global GDP is set to fall from 0.5 percent last year to c0.38 percent this year,” H2 said in its report. In the mid-2000s, this was in the range of 0.60-0.65 percent.