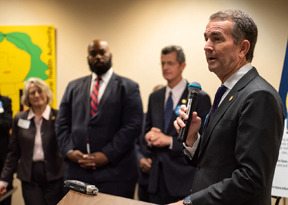 Gaming interests have hired lobbyists to push sports betting and casinos in the Virginia legislature in the session that will begin soon.

Gaming giants such as Caesars and MGM have deployed dozens of lobbyists in the last few weeks in the wake of May’s landmark decision by the U.S. Supreme Court that lifted the federal ban on sportsbook and left its legalization up to the states. So did the slot machine manufacturers Pace-O-Matic, Castle Hill Gaming and Powerhouse Gaming.

So far, states that have created a sports betting regulatory framework include New Jersey, Mississippi, Delaware and West Virginia. Nevada already had operated sportsbook for decades. More than a dozen state legislatures have proposed but so far not passed some form of legislation.

One of those lobbyists, Brian Hess, who will be representing the Sports Fan Coalition, told the Virginia Mercury “I can almost guarantee you there will be legislation for sports betting in Virginia.” The group he represents seeks consumer protections, privacy and the ability for those with a gambling problem to self-exclude from any system that is legalized.

Because Virginia one of the first states to legalize daily fantasy sports two years ago makes it ripe for sports betting, Hess says.

Chris Krafcik, an industry analyst who is the managing director Eilers & Krafcik Gaming, notes that MGM and Caesars operate several casinos across the border in Maryland that draw customers from Virginia.

“We believe both companies are lobbying in Virginia mainly in an effort to protect the flow of foot traffic from Virginia to Maryland, or to ensure they are eligible to operate under any casino-enabling legislation introduced in Virginia, or both,” he says.

MGM conceded as much when it issued a statement that the company “looks forward to working with policy makers as the commonwealth considers gaming-related matters.”

For many years opposition to expanded gaming in the Old Dominion formed a monolithic bloc of conservatives lawmakers. However, this block has cracked in recent years, as seen when the legislature allowed historical racing machines at racetracks and off-track betting operations. The Virginia Racing Commission is poised to allow 3,000 of these machines statewide.

At the same time the Pamunkey Indian Tribe wants to build a $700 million casino in New Kent County and business interests in Bristol want permission to build a destination casino in that city. They have hired seven lobbyists to push the project as creating jobs in a part of the state that is struggling economically.

Such arguments have never worked before in Virginia. For many years Senator Louise Lucas, who represents Portsmouth, has unsuccessfully promoted gaming for that city while arguing that the state was missing out on millions of dollars in taxes and economic stimulation and handing it over to other states. Each year her bills have died in committee.

House Speaker Kirk Cox talks as if nothing much has changed. He told the Washington Post several months ago that he did not support expanded gaming.

Aides to Governor Charles Carrico said he is talking to his constituents and believes that if any legislation goes forward it should be required that a host city’s voters approve of any projects in advance.

Carrico’s chief of staff, Dylan Bishop, commented, “There are considerable hurdles in the legislature regardless of where our office stands on it.”