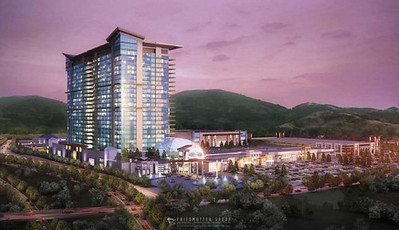 A groundbreaking ceremony was held in Kings Mountain, North Carolina for the Catawba Indian Nation's $273 million casino resort (l.). The South Carolina tribe is seeking a Class III gaming compact; the Eastern Band of Cherokee Indians is suing the Catawbas to stop the project.

Ground recently was broken for the South Carolina-based Catawba Indian Nation’s $273 million casino and resort development in Kings Mountain, North Carolina. Brian Hansberry, president of gaming for the tribe’s casino operator, Delaware North, said a smaller, temporary facility will open in late spring or early summer 2021 with 1,300 slot machines, restaurants and retail outlets. He noted road and exit improvements at Exit 5 off Interstate 85 will be made to accommodate additional traffic.

The 16.8-acre site was taken into federal trust by the U.S. Department of the Interior’s Bureau of Indian Affairs earlier this year. The tribe still is awaiting approval from Governor Roy Cooper for a Class III gaming compact. A spokesperson for the governor’s office said no compact discussions have taken place between the Catawbas and state. Currently only the Eastern Band of Cherokee Indians operate two casinos under a gaming compact with North Carolina.

If a compact is not approved before the first phase—the small casinos—is completed, the tribe would have to proceed with offering only Class II electronic bingo games. The Catawbas operated two bingo halls in York County in the last 20 years; one closed in 2006 after nine years in business and the other ran from 2014 through 2017.

Department of the Interior documents indicate the Catawba venue would include a 195,000-square-foot casino and resort with 75,128 square feet of gaming featuring 1,800 electronic gaming machines and 54 table games plus a 940-seat restaurant, a hotel and retail.