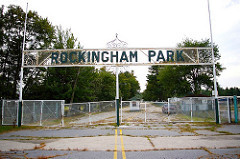 The Union Leader reported last week that city officials are considering allowing a charity casino in Salem, New Hampshire, that would be dubbed Cheers Casino and Poker Room. The proposal is for a casino with a restaurant that serves light meals, 25 poker tables and other additional gaming tables.

Salem previously hosted a charity racetrack, Rockingham Park racetrack, that closed last year after operating since 1906. Unlike a commercial casino, a charity casino would make enough to cover expenses and apply the profits to charities.

Dan Dandreo, the owner of the prospective casino said he thinks the business would be a success because the charity casino at the racetrack was successful until the racetrack itself close.

“We had to figure out if it was going to be economically viable,” he said.

Although the casino has not yet been granted any approvals, the city of Salem recently approved a zoning ordinance that would allow charitable gaming projects and developers have introduced initial proposals to the planning board.