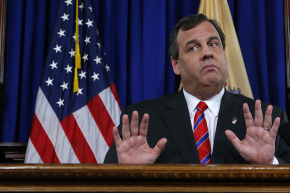 The bill, passed by the state’s legislature, also urges Congress not to enact such a ban.

Though Christie is friends with the president, Trump has been noncommittal on the issue telling the Associated Press last year “I have a lot of friends on both sides of this issue.”

Online gambling has been going strong in New Jersey since 2013 and now brings in about $20 million a month to the state’s Atlantic City casinos. That helped the city’s seven remaining casinos post a revenue increase last year, the first in a decade.

Attorney General Jeff Sessions has also said he would be willing to re-examine a Department of Justice ruling that cleared the way for online gambling. The bill was passed before Sessions’ job security became an issue within the administration.

The New Jersey bill says a federal prohibition would negatively impact the state, “dismantling the investments that the state and Atlantic City casinos have already made to implement and regulate internet gaming.”

It says a ban would take away “economic and employment opportunities already realized” by the state and foreclose the future potential of the industry to “generate tens of millions of dollars in tax revenue, create high-tech software jobs, and foster valuable business ventures for Atlantic City casinos,” according to an AP report.