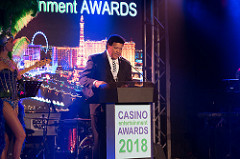 Chubby Checker, one of the icons of early rock ‘n roll, was honored October 10 as Casino Entertainer of the Year at the sixth annual Casino Entertainment Awards, which were presented at the Hard Rock Hotel and Casino.

Bill Engvail was named Casino Comedian of the Year and the Commodores were named Casino Musical Artists of the Year. The Righteous Brothers and Victor Drai were given the Casino Entertainment Legend awards.

• Legends in Concert received the CEA for Casino Production Show of the Year.

• Seth Shomes, Vice President and Head of the Casino Division at United Talent Agency, was named Casino Booking Agent of the Year.