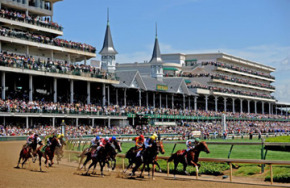 Just as Churchill Downs lays out new construction in Northern Kentucky, it puts a stop to a renovation at the storied track in Louisville. The corporation will move forward with a new gaming center as it demolishes a grandstand at Turfway Park in Florence and stops the $300 million project (l.) at Churchill Downs.

Churchill Downs on April 29 announced a Newport horse racing and gaming center just as demolition of the grandstand at Turfway Park in Florence in Northern Kentucky moves ahead, CEO Bill Carstanjen said in an earnings call with investors April 30.

But in Louisville, a $300 million project at Churchill Downs has been halted because of the coronavirus, according to the Courier-Journal.

The 46,500-square-foot leased space in the Newport Plaza Shopping Center will offer simulcast, pari-mutuel wagering and historical racing machines while Turfway Park undergoes renovation, according to a press release.

On April 21, the Kentucky Horse Racing Commission approved plans to begin construction at Newport as an extension of Turfway Park. The commission’s decision included conditional approval of pari-mutuel wagering. The board also agreed to as much as $38.4 million in capital spending at Newport, according to the Cincinnati Enquirer.

The Newport center will support funding for purses at future Turfway Park live races, and will include a simulcast area with a separate VIP room, a 17,000 square feet gaming floor with 500 historical racing machines, and a bar. Newport will remain open once a new Turfway Park opens.

The anticipated opening date for the Newport center is the last quarter of the year.

“I think this is a big boost, not only to the city because of Newport shopping center, but for the horse industry,” he said.

Meanwhile, the corporation has stopped the $300 million project announced in October.

Based on plans, the project would feature a new seven-story, 156-room hotel; a 900-machine historical racing facility; and a Millionaires Row renovation described as a “finely-curated culinary experience.”

Carstanjen said the delay is “until we have better visibility into the full impact of the pandemic on the regional economy and until after we have completed the next two (Kentucky) Derbies.”

The company remains committed to the build-out of Churchill Downs racetrack, Carstanjen said.

Carstanjen hopes fans will be back for the Derby on September 5. “It’s still four months away. A lot can happen in our country, and I expect that it will. We will adjust and respond to whatever the circumstances.”

Overall, the company generated $2 million in adjusted net income for the first quarter, compared with $25.5 million last year. The company said a $20.2 million after-tax decrease, linked to the temporary closure of gaming facilities as a result of the Covid-19 pandemic, ravaged results, according to CDC Gaming Reports.

Churchill Downs reports that it ended the quarter with $700.9 million in cash reserves after drawing down its revolving credit facility. Second quarter results will likely be worse, given the postponement of the Kentucky Derby, according to the Motley Fool.

The Louisville Courier-Journal reported that Kentucky Governor Andy Beshear said the company can open its track’s backside to horses May 11.

“Our strong balance sheet and the deep experience and resilience of our team will enable us to emerge from these challenging times as a stronger company ready to execute on all of the growth opportunities we have shared with our investors,” Carstanjen said.