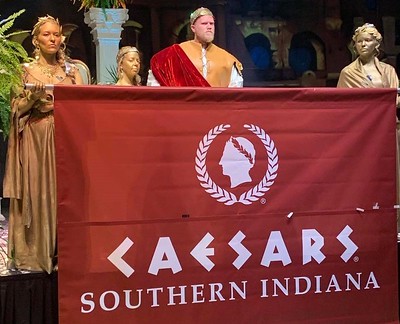 With the $17.3 billion merger of Eldorado Resorts and Caesars Entertainment, the Indiana Gaming Commission may require Caesars Southern Indiana to be sold to avoid market concentration. Will Churchill Downs put in an offer? CEO Bill Carstanjen isn’t saying.

The newly named Caesars Entertainment Inc. would control 50 percent to 60 percent of Indiana gaming revenue, so it needs to drop at least two of those properties to end up at about 40 percent or less. Eldorado Chief Executive Officer Tom Reeg said Caesars Southern Indiana probably would be put up for sale by the end of the year.

Ed Feigenbaum, publisher of Indiana Gaming Insight, characterized the purchase of Caesars Southern Indiana by Churchill as “a no-brainer.” He said the deal could easily pass state regulatory requirements. “Churchill can protect its backyard, add to its Indiana customer base and obtain a missing link between its Chicagoland properties and Louisville,” Feigenbaum wrote.

He added, “The company has the resources (particularly given that it could back off some of its defensive Louisville investments), and should have no trouble being licensed (it already received approval for its sports wagering partnership with Rising Star Casino).”

Opened in 1998, Caesars Southern Indiana has cannibalized millions of dollars from the Louisville racetrack, which was forced to spend hundreds of millions of dollars to refurbish the aging facility. Meanwhile, since the late 1990s, Churchill has dramatically expanded by purchasing racetracks and casinos, and making major investments on online gaming, sportsbooks and mobile betting platforms.

Two years ago, Churchill opened the $65 million Derby City Gaming, offering historical racing machines. The venue was an immediate success, luring Caesars’ customers from Kentucky and significantly impacting its slot revenue. Last December, Caesars fought back with a new $90 million land-based casino, featuring a dining and entertainment complex and a 500-room hotel. Despite the effects of Covid-19, the casino generated $20 million for the host county.

Returning to the second-quarter earnings call, Churchill reported its net loss was $118.8 million compared to net income of $107.1 million for the same period in 2019. Besides Covid-19, a $95.2 million net loss from discontinued operations impacted the overall results. Revenue declined 61.2 percent to $185.1 million compared to $477.4 million in 2019.

Jefferies Gaming Analyst David Katz said, “The upside in the quarter demonstrates the breadth of the growth avenues for Churchill Downs. It reflects the relevant potential of the digital offerings, which should continue to accelerate. Regional gaming also indicated strong margins, consistent with those of other operators.”

Churchill Downs also announced it will launch its BetAmerica sports betting and online gambling platform in Michigan in partnership with the Hannahville Indian Community, pending licensing and regulatory approvals. Under the deal, the partners will open a physical BetAmerica sportsbook at Island Resort & Casino in Harris, Michigan and debut the BetAmerica online sportsbook platform statewide. BetAmerica sportsbooks already are offered in Indiana, Mississippi, New Jersey, and Pennsylvania.