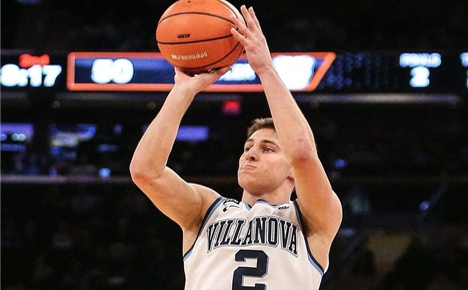 This Saturday promises intense college basketball action, with a slate of top-ranked teams and rivalry matchups. Who will step up in primetime?

College basketball will step up Saturday with a loaded slate of games, so make your picks in advance. Here are our predictions for all four ranked matchups, plus the biggest rivalry in college basketball.

The UConn Huskies have been playing well lately behind a solid six-man rotation led by guard RJ Cole. All of them can score, rebound and pass the ball efficiently, so look for a tight contest with the Villanova Wildcats, who have been rolling teams lately. The Wildcats are one of the best teams in the country of late, winning nine of their last 10 in conference play.

At this point in the season, Coach Jay Wright asserts his dominance, and the ’Cats have captured four of the last six Big East titles. Nothing should change here on Saturday afternoon, with Wooden Award contender Collin Gillespie leading Villanova to a W.

Sign up to wager on NCAA men’s basketball at PlaySugarHouse. Your first deposit will be matched, dollar for dollar, up to $250.

The Iowa State Cyclones got off to a perfect start this season at 12-0. But they’ve come back to earth since, losing five of their last nine. The Texas Longhorns, on the other hand, have won 10 of their last 13. Now they’re in a brutal stretch: five consecutive games against ranked conference opponents.

Iowa State is arguably the weakest of those five, so the Longhorns need this one. Expect a strong showing in a home victory.

Bet $50, Get $50 when you sign up to wager on college hoops at BetAmerica! Just create an account, make your $50 deposit, and play!

This will be a classic battle of offense vs. defense, as Kansas Jayhawks star guard Ochai Agbaji works to penetrate the stingy Baylor Bears defense.

As Baylor showed a year ago, defense wins championships, and the team’s guards will neutralize the Jayhawks’ high-scoring guards. On Saturday, look for Waco to claim another victory.

The Arizona Wildcats have been absolutely dominant this season, on both sides of the ball. They average the third-most points per game in the country at 86, 21.5 more than they allow (64.5). They rank tops in the nation in rebounds/game (43.7) and fourth in blocks/game (6.4).

The USC Trojans have been playing great basketball behind Isaiah Mobley, who’s following in his brother’s footsteps from a year ago. But the Wildcats match up with the Trojans very nicely and will continue to assert themselves as one of the West Coast’s best this season.

New customers cash in at Borgata Sportsbook. Sign up to wager, and you’ll get a $20 bonus plus and get $100 in free bets. Now that’s a winning play!

This one isn’t a ranked matchup, but it offers the excitement of one, regardless of rankings. The Duke/UNC rivalry is as old as time, and the players will be chomping at the bit to win. While the Blue Devils are ranked ninth in the country and look like the superior squad, it’s hard to see either of these teams season-sweeping each other. And if the UNC Tar Heels are going to win one, it will most likely be at home.

North Carolina could use this win to jumpstart their momentum heading into the postseason. Expect an upset in Chapel Hill.

Saturday’s college basketball slate promises intense conference matchups with high stakes across the board. Make sure to tune in and build up your bet money to roll into Super Bowl weekend! Good luck and enjoy the meaningful February action.