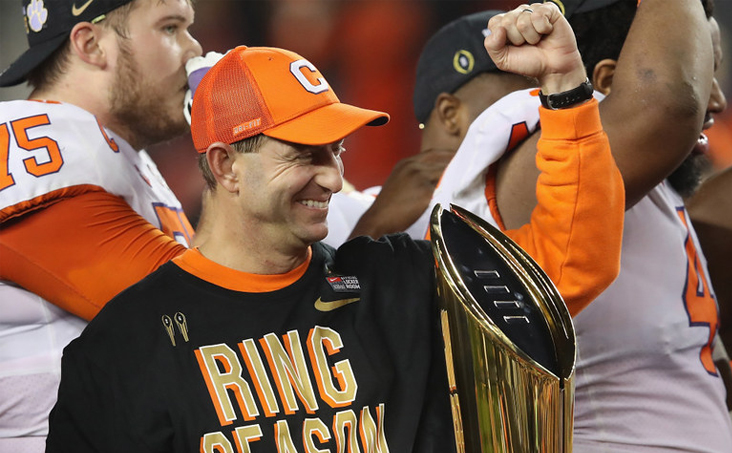 There’s no better way to end the old year or start the new than cashing in on all those college bowl games. Here’s a look at a few you should play, along with iGP’s fearless forecasts.

It’s officially college bowl season, with just one game left to determine which teams will survive into the offseason. Here’s a look at a few you should watch.

This playoff semifinal matchup is a tough one to call. Both teams, with one exception each, have blown out every team they’ve seen this year. They’ve both looked dominant and covered at a ridiculously high rate. Something’s gotta give here.

For me, it comes down to experience and coaching. South Carolina’s Clemson has been on a tear the past few years behind head coach Dabo Swinney, piling up playoff win after win en route to two of the last three national championships.

My Take: I think Clemson continues on this trend and covers by a hair.

The other playoff semifinal doesn’t figure to be as tight as the former. LSU has had the toughest schedule of any semifinal team, yet still remains undefeated and sits accordingly at #1 in the nation. The team has compiled tough win after tough win, making it the huge favorite against an Oklahoma team that slipped into the playoff at the last second.

LSU should definitely win this game, but expect Oklahoma to put up a fight behind Alabama transfer QB Jalen Hurts, who’s 2-0 in his college career against LSU.

Home of the better bet! Sign up to play at BetMGM.com, and get a risk-free first bet up to $500.

The granddaddy of bowl games promises to be an exciting one this year, featuring two very talented teams with strong resumes.

Wisconsin is led by arguably one of the greatest college running backs of all time in Jonathan Taylor, who was snubbed as a Heisman finalist after another record-breaking season. But underdog Oregon is coming off its best win of the year against a very impressive Utah Utes team. This team has something to prove. Two straight Top 10 victories is one hell of a way to finish a season, and QB Justin Herbert will look for one more stellar performance to propel him into the top 10 of the NFL Draft.

My Take: Bottom line, Oregon has more to prove and will come out with a rose bouquet after this one.

This one’s on SugarHouse! Sign up to wager at PlaySugarHouse.com, and your first deposit will be matched up to $250.

Georgia comes into this game as most likely the best 2-loss team in the country. If it weren’t for a bad slip-up against South Carolina early on, the Bulldogs would be gearing up for a rematch in the playoff semifinal with LSU, one game after losing to them in the SEC championship game.

They’re simply too talented to drop this game, especially with strong QB play from Jake Fromm. Texas’ Baylor, however, is not to be taken lightly, and with the line at just a half-point off from a 1-TD margin, the spread is a tough call.

Okay, this bowl game is a sort of a disappointment, on both sides. Michigan had very high expectations this season, but never lived up to them. And the Crimson Tide slipped a lot at the end of the season, specifically after losing star QB Tua Tagovailoa to an ankle injury.

Alabama is also expected to be without several other starters due to injury, and it’s likely that even more will elect to rest and train for the NFL Draft. That said, this team is way too deep to lose to a vastly overrated Michigan team.

My Take: Expect this to be a close one, with ‘Bama either pushing at -7 or failing to cover.

The Auburn Tigers are heavily favored, and rightly so, after a big win against Alabama in their last game. They’ve lost three times this season, but all to Top 10 teams. So this should be an easy call, right? Wrong.

Head coach PJ Fleck has had a tremendous influence on the Minnesota football program in his short time at the university, headlined by a big-time victory this season against the then-undefeated Penn State Nittany Lions.

My Take: I expect Fleck’s magic to continue on New Year’s Day with an upset in Tampa. “Row the Boat,” Minnesota.