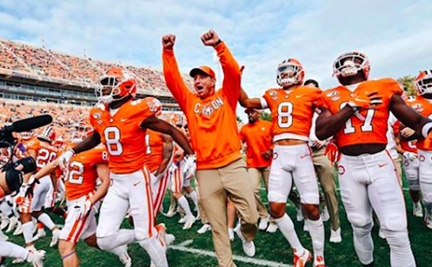 Some college football teams have dropped out of the upcoming season. But that could make the betting field just a little more interesting.

Joe Burrow’s in the NFL now, with the Cincinnati Bengals. Tua Tagovailoa is a Miami Dolphin.

Those two quarterbacks produced a memorable college football championship season that ended when Burrow’s LSU Tigers squad beat the Clemson Fighting Tigers in January. And now, the next college football season is upon us. In varied forms. Not everybody will play, because of Covid concerns.

The Ivy League became the first Division I Conference to drop out of the upcoming season. A number of other schools in lower divisions have also taken a pass, such as the entire Division III Centennial Conference, which includes Johns Hopkins, McDaniel and other schools in Maryland and Pennsylvania.

This is important, because there’s a whole big world out there beyond the major universities. And bettors will adapt as college football closes in on a late August opening.

Just as in the NFL, college ball officials are raising concern among participants about Covid-based protocols. Bettors, of course, will view this as an audible.

Double up on somebody else.

Take a look at Clemson. PlaySugarHouse.com has the Fighting Tigers as the favorite to win it all at +150, while others have them at +250, including BetMGM.com and PointsBet.com. That’s a sizable gap if you like the team that appeared in the national final to win.

LSU and Florida are both 20-1 and LSU, at least, will be seriously challenged. It’s hard to lose the Heisman Trophy winner and repeat as national champion.

Sign up to wager on PlaySugarHouse.com, and get right in the game with a 100% deposit match, up to $250. Start today!

For perspective on Clemson’s expectations, its first game is September 3, when it visits Georgia Tech. Despite playing on the road, Clemson is -24. And forget taking the Tigers on the moneyline—they’re -5000 or 50-1. Wanna shell out $100 to make a profit of $2?

Georgia Tech is +1400 on the moneyline. Both teams are the standard -110 on the spread line.

5 Steps to Your Best