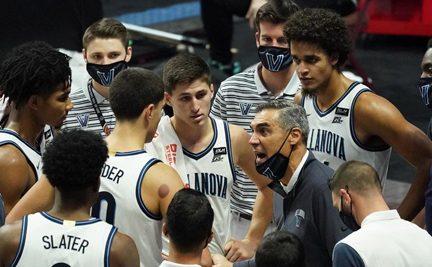 After watching the NBA have great success with its 2020 postseason bubble, the NCAA has decided to try its hand at this quarantine trend. Mohegan Sun Arena in Uncasville, Connecticut has begun to play bubble and will continue to for the next couple weeks as it hosts multiple season kick-off tournaments. Since this should be a lot of fun to watch and keep track of, let’s update/preview each of these ‘Bubbleville’ tournaments’ final results.

This small, four-team tournament took place November 25–26. The Villanova Wildcats (heavily favored in both games) were able to advance to and eventually win the championship by nine points. While perhaps not living up to full blowout expectations, ’Nova dominated this two-game tourney and came out with some hardware. You can’t ask for much more, as the #3 team in the country begins at 2-0. The second-place Arizona State Sun Devils also looked solid in their two games, and looks to build off that early season progress with a late-Top 25 ranking.

Due to Covid concerns and the nature of Bubbleville, the format of the Legends Classic has changed this year. The field initially dropped from eight to four teams, before adding two more teams to get back up to six. There will be no champion, and this series will serve as more of a showcase tourney this year. In Game 1 on Tuesday, the USC Trojans embarrassed BYU Cougars by a score of 79-53. These two teams both get one extra game in the Legends Classic, while every other team gets just one. The Florida Gators and the UConn Huskies are probably the two best teams partaking in this year’s Classic, but unfortunately there is nothing to play for.

The Wildcats have already been eliminated. Along with them have gone the South Florida Bulls and the San Francisco Dons. The Virginia Tech Hokies and Rhode Island Anchormen have each gone 2-0 to start the tournament and are most likely the two favorites of the teams left, in that order. Crazier things have happened, but this is looking like the Hokies’ to lose.

Your first in-play bet on any college basketball game at PointsBet.com is risk free up to $25. If your first bet loses, you’ll receive a free bet refund up to $25! Through December 7.

This tournament features much more top talent than any of the men’s tournaments at this year’s Bubbleville event. All four teams are ranked, and with the exception of the #20 DePaul Blue Demons are all in the top 10. While it’s hard to bet against #1, the South Carolina Gamecocks will have a very tough test for a season tip-off tournament. The hopeful final matchup of #1 SCar against the #5 Louisville Cardinals leaves plenty of room for expectations and excitement. Nonetheless, the nod has to go to the Gamecocks to come out as early-season champs.

The 11-day, 46-game Bubbleville event should be a lot of fun to keep track of, similar to the NBA playoffs. And in addition to these big-name tournaments listed above, there are plenty of individual games being played at the bubble environment as well. Enjoy the games and don’t be afraid to take some shots! Good luck!