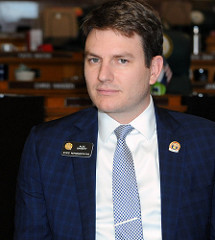 In Colorado, Democratic state Rep. Alec Garnett filed a bill title for a sports betting measure in the next legislative session. His bill would require a voter referendum on the issue in November 2019, if two-thirds of lawmakers agree it should be on the ballot. “I think the best way is to come together, let’s figure out what we believe is the right balance, and go ask voters, ‘Do we think this is going to work?’” he said. Colorado’s Attorney General is expected to announce soon whether a referendum on sports betting is necessary. It would require 55 percent of voter approval to pass.

Republican state Rep. Cole Wist and other lawmakers believe a voter referendum is likely, especially considering expanding beyond Blackhawk, Central City and Cripple Creek, the only cities where casino gambling permitted—and today’s technology. “The question of a mobile interface may give rise to a related question about whether or not that’s truly consistent with the language of the constitutional amendment,” Wist said.

Garnett noted, “If something happens on Sunday morning, a weather system moves in and the Broncos are going to be playing in 6 inches of snow, the line’s going to move. It would be unrealistic to expect somebody to drive up to Black Hawk or Central City and change that bet that they made a couple of days before.”

But Peggi O’Keefe, executive director of the Colorado Gaming Association, said the organization will protect the interests of the three approved gaming towns. “I think this is something we want to make sure doesn’t pop up on every street corner or in people’s backyards,” she said.

Regulatory attorney Tom Downey said referendums make an issue more likely to pass. He noted even if sports betting would pass a referendum, rules would have to be written “to fill in the details and get it up and running. Lightning speed would be January 1st of 2020,”Downey said. He noted legal challenges could delay sports betting even more.

Colorado Gaming Association President David Farahi, who runs Monarch Casino in Black Hawk, said, “Everyone is trying to get their mitts into the sports betting cookie jar. What I can tell you, most people don’t understand, is that that cookie jar is not filled with giant cookies, it’s filled with crumbs.” Farahi said sports wagering would much needed revenue growth for the state’s casinos, but noted profit margins are less than 5 percent. “And so that will, I think, temper people’s appetite for a huge fight,” Farahi said.

The last “huge fight” occurred in 2014, when casinos stopped Mile High Racing & Entertainment, operator of Colorado’s sole horse racetrack, from expanding gaming at racetracks outside the three approved towns. It was one of the most expensive political battles in state history, with both sides raising a total of more than $36 million.