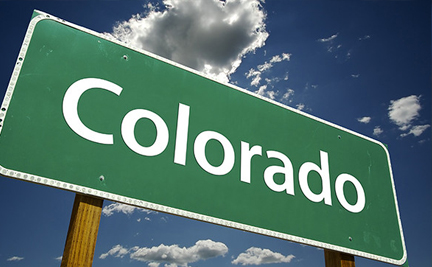 Since mobile sports betting was approved in Colorado in May 2020, the state has become a hotbed of online action. Here’s what new gamblers need to know.

Since mobile sports betting was approved in Colorado on May 19, 2020, the state has become a hotbed of action for gamblers. iGaming Player was recently licensed to offer Colorado sports betting options to fans from Fort Collins to Trinidad and Grand Junction to Burlington. Here’s what you should know before you place an online sports bet in the Centennial State.

But for now, our focus is on mobile sports betting.

Land-based casino gambling in Colorado is restricted to the three Rocky Mountain towns mentioned above. But online gambling is statewide. So you can bet directly from your computer, tablet or phone, provided you’re physically located inside state borders (geolocation technology will verify that you’re in Colorado before letting you wager on a sportsbook app).

You must be 21 to bet on sports, including horse racing. You must also be 21 to play online casino games. But people 18 and older can legally play the lottery and bet on bingo.

Here’s a look at some of the market’s preferred sportsbooks:

BetMGM is a joint venture of Roar Digital, a joint venture of MGM Resorts International and GVC Holdings, and was one of the first sportsbooks to go live in Colorado when the market opened. It offers sports betting through an exclusive primary skin agreement with Midnight Rose Hotel and Casino in Cripple Creek. New players at BetMGM get $25 free and a 100% deposit match up to $1,000. Bet with BetMGM now.

William Hill. A U.K.-based bookmaker and longtime Nevada staple, William Hill is rapidly expanding its footprint in the U.S.—in fact, it was acquired by gaming giant Caesars Entertainment last year in a $3.7 billion deal that could propel it to the top of the list in the stateside market. Caesars plans to offload William Hill’s non-U.S. operations to concentrate on the growth of sports betting here. New bettors get up to a $500 free bet with their first deposit. Bet with William Hill now.

BetRivers is a unit of Rush Street Interactive, one of the most established and experienced sportsbooks in the United States. Under a master license agreement with J.P. McGill’s Hotel and Casino in Cripple Creek, the mobile sportsbook launched on May 1, 2020. BetRivers offers players the opportunity to take part in its iRush Rewards program, which rewards sports bettors for their patronage. The mobile sportsbook offers line specials, daily boosted odds, parlays of the day and much more. New players can take advantage of a 100% deposit match up to $250. Bet with BetRivers now.

Colorado sportsbooks apps offer live odds on many sports, including spreads, moneylines and sometimes even proposition bets on events that take place during a game.

How to Start Betting in Colorado

A Look at the Colorado Sports Scene

So let’s take a look at the state of Colorado sports in 2021:

Two of the four professional sports teams in Colorado are in the midst of their seasons, and another is set to begin in a month.

The Colorado Avalanche is the Centennial State’s best chance to bring home a championship, but that doesn’t mean there aren’t betting opportunities with the other three major professional sports. 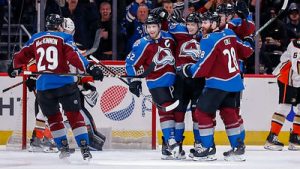 The Avs opened as favorites to win the Stanley Cup back in September. BetMGM had them listed at 8/1, with the defending champion Tampa Bay Lightning at 10/1. The Vegas Golden Knights were also at 10/1.

Five weeks into the season, Colorado is still favored by BetMGM at 7/1, but has been joined by Vegas. Tampa Bay is third at 8/1.

The Avalanche and Golden Knights have gotten very familiar with each other, having already faced off in four games. The Avalanche won two of those four, and the teams will meet four more times this season, twice in March and twice in April. It’s possible that they meet again in the West Division Final. Colorado is the favorite at BetMGM to win the division at +115, while Vegas is second at +175.

The Denver Nuggets were expected to be longshots to contend for the NBA Championship this season. William Hill had them at 20/1 to win the Larry O’Brien Trophy, well behind the 15/4 favorite, the Los Angeles Lakers.

The Nuggets went to the Western Conference Finals last season, but so far this year have been struggling with injuries and inconsistency. They’re currently seventh in the conference standings, and two games above .500.That’s caused William Hill to drop them to 25/1.

Injuries have really hobbled the team this season. The guard position has seen JaMychal Green, Gary Harris, Monte Morris and Jamal Murray struggle with ailments, from shoulders to ankles.

Murray, who returned to the lineup and scored 50 points in his last game, said injuries have really been a setback.

“We got a lot of bodies out,” Murray said. “You guys don’t take that into consideration sometimes. With a lot of guys out, we have Thrill (Will Barton) playing the four. (Bol Bol) hasn’t played all season.”

While the team might not make a run at the title, it does have a legitimate contender for MVP. Center Nokola Jokic is currently third at William Hill to win the award at +550. Los Angeles Laker LeBron James is the favorite at +125, and Philadelphia 76er Joel Embiid is second at +350. 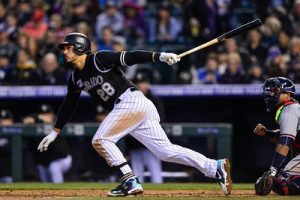 For the last two seasons, the Colorado Rockies have been among the worst teams in baseball. They finished with a 26-34 record in the shortened 2020 season. In 2019, they were 71-91.

Personnel-wise, the team took a hit when it decided to trade away All-Star third baseman Nolan Arenado. Fans were so upset about the face of the franchise being dealt to the St. Louis Cardinals, they threatened to boycott the team.

Colorado was dealt a second blow when outfielder Ian Desmond announced earlier this month that he was skipping his second consecutive season because of Covid-19 concerns.

“I’ve let my teammates know, as well as the coaching staff and the front office, and they have all been extremely understanding and supportive,” Desmond wrote on Instagram. “I wish nothing but the best for the entire Rockies organization and have let them know I am willing to do whatever I can to help them from afar.”

With those two players missing, it could be another long year for the Rockies. BetMGM has their win total over/under at 64.5. 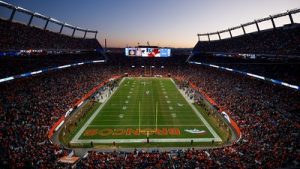 The bad news for the Denver Broncos is they need a quarterback, and aren’t going to climb out of the AFC West cellar until they get one. The good news is there are several available for the team to try and get via trade.

The biggest prize would be Houston’s DeShaun Watson. That would give the team instant credibility, and might even improve its odds to win the Super Bowl and AFC. Currently they’re 75/1 to win the Lombardi Trophy and 35/1 to win the AFC Championship. A more realistic goal for the Broncos might be to compete in the AFC West, though they’re 16/1 to win that, and are projected to finish last again.

There’s no doubt Colorado sports betting will continue to grow as bettors become more comfortable with the operators and the apps. They waited a long time for access to legal U.S. betting sites. While too many offshore operators still exist, we, at iGaming Player will continue to provide options for bettors who want the safety of dealing with legitimate operators and assurances of full payouts.

Be sure to always keep gambling safe, fun and legal! For more on the signs of problem gambling and ways to seek help, click here.