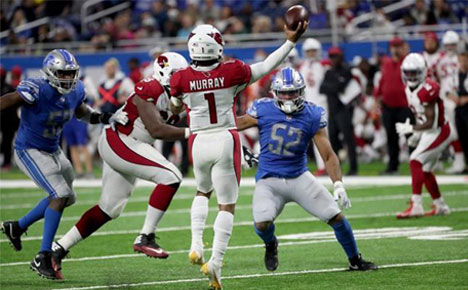 Colts. Cardinals. A Christmas Day showdown. NFL fans, here’s what you need to know before betting this Week 16 game.

NFL fans get a great Christmas present this year in the form of a doubleheader that concludes with the Arizona Cardinals hosting the Indianapolis Colts.

Both teams look like they’re heading for the playoffs, so this should be a high-level game that has meaning for both. Of course, these two teams haven’t met since 2017, and the Colts haven’t won in Arizona since 2009. The Christmas Day game is expected to be a close one, with the Cardinals favored by one point at home and the over/under listed at 49.5 points.

Sign up to wager at BetQL and unlock its model’s best bets, player prop values, top trends and more for this game!

Indy’s impressive turnaround continued last week with a statement win over the New England Patriots. The Colts have now won five of their last six games and seven of the last nine, getting them to 8-6 on the season. The bad news is they got swept by the Tennessee Titans this year, putting them two games behind the struggling Titans with three games left to play. However, the Colts currently own the top Wild Card spot, even if there are four 8-6 teams tied for the three spots. As long as the Colts keep winning, there will be no keeping them out of the playoffs. 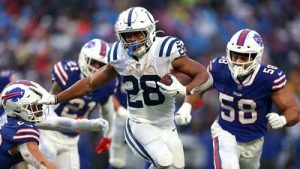 Jonathan Taylor continues to pave Indy’s path to the playoffs while making himself a serious MVP candidate. Taylor rushed for 170 yards against the Patriots last week, giving him at least 140 rushing yards in four of his last six games and 12 total touchdowns during that span. He’s literally putting the Colts on his back and carrying them toward the playoffs. Taylor’s efforts have been needed because the Colts are somewhat limited in the passing game outside of Michael Pittman. Plus, Carson Wentz was just five for 12 for 57 yards with an interception last week, as he’s faded a little bit down the stretch despite having Taylor doing the heavy lifting.

Defensively, the Colts can be a little inconsistent, although they have been getting the job done lately. Last week, they kept New England off the scoreboard until the fourth quarter, and that came one week after producing a shutout against the Houston Texans. In fact, four of their last five opponents have been held to 17 points or less. While there isn’t a lot of high-end talent on the Indy defense, the Colts are solid overall and have done a great job of creating takeaways this season, collecting 17 interceptions and 14 fumbles in 14 games.

Score Cash at the Half with BetMGM’s Halftime Haul on Thursday Night Football. Place a moneyline wager on either team. If they’re up by 10 or more points at the half, your bet counts as a win. 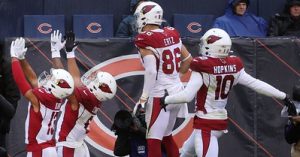 The Cardinals should be eager to get back on the field and put last week’s humiliating loss against the Detroit Lions behind them. It was Arizona’s second straight loss and the fourth in seven games, dropping them to 10-4 on the season.

The Cardinals are now in a fight with the L.A. Rams for the NFC West crown, and have lost their grip on the best record in the NFC. In a few short weeks, the Cardinals have gone from the top seed to a potential Wild Card team, so it’s critical that Arizona get back on the winning side of things.

Obviously, getting Kyler Murray back from injury was supposed to help the Cardinals. But Murray didn’t have to do much against the Chicago Bears a few weeks ago, and hasn’t looked like himself the last two weeks. His passing yards are fine but the efficiency isn’t there. Murray also has three interceptions in the last two weeks and only ran the ball four times for three yards against Detroit last week.

With DeAndre Hopkins done for the rest of the regular season and Rondale Moore getting hurt last week, there’s even less reason for the Cardinals to be optimistic. James Conner hasn’t been much help in recent weeks, while Chase Edmonds has been limited, putting even more pressure on Murray to carry the Arizona offense.

Meanwhile, the Arizona defense is starting to falter as well. It’s not exactly a regular occurrence for teams to give up 30 points against the Lions. But the Cards did just that last week, giving up at least 30 points in three of their last five games, all losses. Talent-wise, the Cardinals are much better than what they’ve shown recently.

But much like the Arizona offense, the level of play has dropped off considerably for the defense since the start of the season, which is becoming a serious concern heading into the playoffs.

This is definitely gut-check time for the Cardinals, who are a little short-handed but need to snap out of their funk. The good news is that Arizona’s defense is strong at linebacker, which could allow them to keep Taylor under wraps, especially if Wentz isn’t able to hurt them through the air.

Meanwhile, Murray should be a little more comfortable playing at home, especially against a defense that shouldn’t put too much pressure on him. If Murray can play a little closer to his potential, the Cardinals should be able to squeeze out a close win at home.

First Time Depositors get a $500 Matched Sports Free Bet at Caesars Sportsbook. Bet on your favorite NFL matchups online, and Caesars will match it, dollar for dollar, up to $500! Minimum odds -$200.