The 2020 MLB playoffs are kicking off this week. Let’s take a look at which teams to bet—and which ones to bypass.

It’s finally playoff time for Major League Baseball. The shortened 60-game season blew right by, and most of the teams predicted to be in the playoffs are indeed in, with a few surprises here and there.

With four to five teams from each league capable of taking the World Series this year, this should be a finale to remember. Let’s take a look at which teams are on the right side of the hype—and why.

The Cincinnati Reds enters the post-season as one of the hottest teams in baseball, having won 11 of their last 14 contests. They’re matched up with the Atlanta Braves in the Best of 3 wild-card round. And while Atlanta is a solid club, it comes in after dropping its final series of the season to one of the worst teams in baseball, the Boston Red Sox. Cincinnati has strong front-line pitching and a scorching-hot lineup capable of taking two from Atlanta to move on. After that, they’ll most likely face the division-rival Chicago Cubs in the Best of 5 divisional round, another winnable series. Don’t be surprised if the likely NL Cy Young winner, Trevor Bauer, leads this team on a magical autumn run.

The Chicago Cubs aren’t getting nearly enough love for their talent level and their section of the playoff bracket. While this team is favored in its first round matchup with the Miami Marlins, it isn’t by much, and the talent gap between these two teams is astronomical. Miami’s had a great season, but Chicago should quickly dispatch the Marlins before beating the winner of Atlanta/Cincinnati to advance to the NLCS. The Cubs still have most of their 2016 World Series team (and Jason Kipnis from the opposing Cleveland Indians), a group that knows how to win when it matters. A deep run from this team seems likely.

Yes, I’m all in on Chicago baseball this October. The White Sox were the top team in the American League just a few weeks ago, and now find themselves series underdogs to the Oakland A’s in the first round of the playoffs. This team features a frightening lineup and solid top-of-the-rotation pitching that should translate to post-season success. Don’t be surprised if the Sox not only get past Oakland, but also go on to make a World Series run.

Make your first bet pay at WilliamHill.com. Create a new player account today, and you’re in for a Free Bet up to $500. Terms and conditions apply. 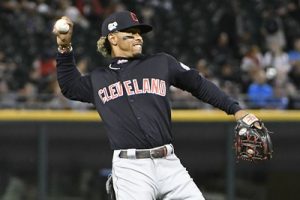 The Cleveland Indians are a tough team to call because of how inconsistent they’ve been. Their starting pitching is very strong, but their lineup doesn’t seem to be up to post-season standards. They also happen to be running into a smoking-hot New York Yankees team in the first round. If the Indians do grab two against New York, don’t expect them to beat Tampa Bay three times out of five in the next round. Stay away from Cleveland this October.

The St. Louis Cardinals are underdogs in their wild-card round matchup with the San Diego Padres, but not by nearly enough. San Diego’s loaded and looks ready to make a deep run in this year’s playoffs. The Cards had a nice season, but don’t have nearly enough firepower to make any serious noise in the post-season. Their pitching just doesn’t seem strong enough to win big games in October, and they have some holes in their lineup. San Diego has neither of those problems. A quick exit seems to be in the Cards here.

This post-season should be a blast, with plenty of solid teams still alive. My best advice: just to ignore all responsibilities and binge-watch these early-round games. You’ll be thanking me later.