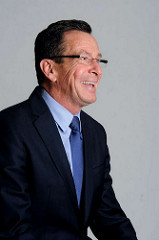 Connecticut Governor Dannel P. Malloy is holding out hope for a settlement with the state’s two gaming tribes, the Mohegans and the Pequots, that might allow the legislature to legalize sports betting.

The governor last week gave lawmakers a one week deadline to let him know if he should call them into special session. He said “it’s possible” he could reach a settlement to give to the legislature. But he wants a firm commitment from the leaders.

Malloy was blunt: “If there’s no intention to take these things up, then let me know, because I’m not gunning for extra work.” The governor’s term will end January 6. The election being held in November will pick his successor.

Malloy told the press that he fears the state will fall behind neighboring states like Massachusetts and New York if the legislature doesn’t act soon. Rhode Island has already legalized sports book, which will be available by the time the football season begins. New Jersey was ready with its law as soon as it won the case against Professional and Amateur Sports Protection Act, which the Supreme Court held unconstitutional in May.

Following that decision lawmakers asked Malloy to begin negotiating with the tribes. After being updated by Malloy last week, Senate Democratic Caucus spokesman Adam Joseph commented, “Coming out of the meeting, the legislative leaders agreed to reach out to caucus members to determine if the governor should continue down the path of negotiation with the tribes.”

Malloy told the Connecticut Mirror: “The bottom line is in the last few weeks real action has taken place. People have started to move in a direction where I think an agreement could ultimately be reached with respect to who could operate within our state, how they would operate within their state, what could be bet on, and the like.”

Malloy added, “This is about competitiveness. I think it really is more about … maintaining market share and perhaps capturing a portion of the illegal gaming revenue that is generated.”

Although legislators have excitedly said sports betting could bring in a lot of tax dollars, as much as $80 million, the reality may be more modest. Earlier this year the Office of Financial Analysis estimated that figure at closer to $16 million.

Lawmakers began holding meetings about sports betting in March, when it became likely that the Supreme Court would lift the ban. At that time the committee members said in no uncertain terms that they weren’t interested in paying the professional sports leagues an “integrity fee.”

The sticky part of the negotiations between the state and its gaming tribes is that they are bound by the 1990s-era state tribal gaming compacts, which gives the state 25 percent of the casinos’ slots revenue in return for giving the tribes exclusive rights to operate casino games. The tribes assert that sports book is a casino game, although currently only casinos in Las Vegas offer it.

The state doesn’t want to endanger the 25 percent from the tribal casinos, which last year was more than $250 million.

The governor’s desire in calling a special session, rather than letting his successor handle the issue, is to be able to accept sports wagers early next year. Waiting for a new governor could set the process back to square one.

The state needs additional funding as it has chronic budgetary issues.