HomePlay BallConnecticut Lawmakers Could be Ready for Sports Betting

Connecticut Lawmakers Could be Ready for Sports Betting 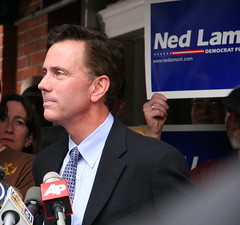 Political junkies in Connecticut are predicting that Governor Ned Lamont (l.), the two gaming tribes and the legislature will be able to get together and agree on legalizing sports betting.

With some roadblocks removed, watchers of the Connecticut political scene believe the time may be right for a bill to approve sports betting.

One of the roadblocks that has now gone is the satellite Tribal Winds Casino that the Mohegan and Mashantucket Pequot tribes had wanted to build in East Windsor, near the state line with Massachusetts.

The tribes operate Foxwoods and the Mohegan Sun, but had wanted a smaller casino near the border to blunt the effects of the MGM Springfield casino on their revenues.

The Covid pandemic forced the tribes’ hands and the economic emergency the virus has created in the state has created a need for new sources of state revenue, which sports betting proponents say could be in the millions.

They issued a joint statement saying that the state’s Covid restrictions have cost millions and forced them to shift their focus to their existing casinos.

The statement said, “We’ve been through so many ups and downs when it comes to the Tribal Winds project,” the statement said. “There have been many moments where it was clear the easiest path would be to just walk away. And while there’s no way we could have accounted for this latest delay, we still believe Tribal Winds is a viable project that will come to fruition once markets improve and we’ve taken concrete steps toward restoring normal business operations.”

Taking the Tribal Winds casino off the table, even for the moment, removes the complication of MGM, which had fought it tooth and nail, in court and out. Add to that the fact that the MGM casino is having financial problems of its own that predate the pandemic but were exacerbated by it.

The pandemic has also put the brakes on MGM’s efforts to build a commercial casino in the state. It had proposed such a casino for Bridgeport, the state’s largest city. Now that appears to be dead and MGM no longer has lobbyists in the state capitol.

This may or may not be attributed to the departure of MGM CEO Jim Murren, who is a Connecticut native. His replacement has shifted focus from an MGM casino in the state.

On December 21, Governor Ned Lamont indicated that he, too, might be ready for compromise. At a press conference he said: “This is something that’s going on all around us, and I think Connecticut should participate.” Lamont added, “If we found out anything in the course of this horrible Covid cycle, more and more of the world is going virtual, more and more of the world is going online. That’s tele-health and tele-learning, but it’s also iGaming and sports betting. And I don’t think you want Connecticut left behind.”

This was a major turnaround for the governor.

Lawmakers and the tribes have argued over sports betting since it became legal two years ago. The tribes claim that their tribal state gaming compacts guarantee them exclusive rights to offer casino games because they pay the state 25 percent of their slots revenue. They argue that sports betting is a casino game.

Legislators, a former attorney general and some industry representatives disagree.

Bunnell said, “We deeply value our partnership with Connecticut that is generational and historical. Certainly the pandemic has been a challenge to all of us globally, but I think it has brought some clarity to this industry and what the future may hold for our partnership.”

There are other stakeholders whose interests demand to be considered. Such as Sportech PLC, which operates off-track betting operations in the state; and the state lottery. Sportech insists on a place at the table, something that the tribes have just as adamantly opposed.

But Sportech’s political position is not as strong as the tribes’, and it may have to settle for half, or even a quarter of a loaf.

The tribes may be more likely to want to hammer out a compromise because Covid has been costing them so much money. As was shown in the annual reports on the fiscal year that ended September 30, 2020, which were released last month by the state.

Foxwoods Resort Casino reported revenues of $539.2 million for the year, a 31.6 percent plunge from the year before. The Mohegan Sun’s net declined to $715.7 million from $992 million, a 27.9 percent decline.

MGE has also seen “steep increases in infections in virtually all of our markets globally” which almost put the brakes on the construction of its $1.5 billion integrated resort in Incheon, South Korea.

In its annual report. Dated December 22, MGE stated, “The closure of our property and phased opening has had a material impact on our operating results …” Of that revenue, 78.5 percent came from gaming.

MGE manages the Paragon Casino Resort in Louisiana and the ilani Casino Resort in Washington for other tribes. It reopened those casinos in May and reopened its Mohegan Sun Pocono in Pennsylvania on June 22 and its Resorts Casino Hotel in New Jersey on July 2.

The MGE annual report added: “Like other integrated resort operators, these business disruptions have had a material adverse impact on our financial condition, results of operations and cash flows.”

Caesars Gets Nod to