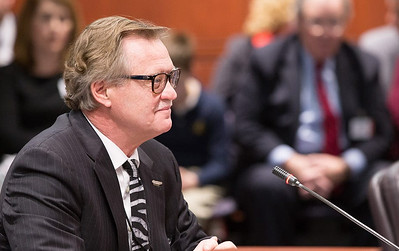 For years, Connecticut tribes, other gaming interests and legislators have argued over legal sports betting, but are no closer to passing a bill. At issue is the tribes’ exclusive right to gaming. One thing is certain, says state Senator Paul Formica (l.): the state needs money, even from “sin taxes.”

Ever since the U.S. Supreme Court lifted the federal ban on sports betting two years ago, Connecticut lawmakers and the two gaming tribes have been maneuvering over how the state should legalize it.

Although legislators and the Mohegan and Mashantucket Pequots, which operate the Mohegan Sun Casino and Foxwoods Resort Casino have come close to an agreement, there remain at an impasse. The insistence by some lawmakers that off-track betting operators and the Connecticut Lottery Corp. should be allowed to offer sports book and the tribes’ insistence that they are given exclusivity of all gaming by their tribal state gaming compacts has meant that no agreements appear likely this year. The legislative session has ended for 2020 although the legislature could always schedule a special session.

The efforts to reach an agreement on sports betting have largely been sidelined by the Covid-19 pandemic, despite multiple hearings and several bills having been filed.

Several weeks ago Ted Taylor, president of Sportech Ventures, which operates an OTB parlor, wrote an op-ed in which he described the tribes as “roadblocks” to a sportsbook deal. He wrote, “Connecticut can act now to protect its consumers and its financial stability this year, while there is still time to make a meaningful impact on state finances.” He claims that because sports betting is not a traditional “casino game” that it’s not covered by the compacts.

This caused the tribes to reiterate their claim that gaming exclusivity is theirs to share if they please, but that it is an absolute right that must be recognized.

Mashantucket Pequot Gaming Commission Chairman John Henningsen wrote an opinion piece in which he cited a state court decision that defined sports betting as a “casino game.” He said the state risks losing the $250 million annually that the tribes pay as part of their agreement with the state. They pay 25 percent of slots earnings. He wrote: “Money and odds are integral to gaming. Legislation that wagers $250 million for the chance to ‘win’ $13 million to $15 million and guaranteeing tribal litigation defies logic.”

One factor that could force a sports betting solution in the New Year is the pandemic-generated recession, during which the state’s unemployment rate has reached nearly 15 percent and the state budget deficit is projected to reach $2.1 billion.

State Senator Paul Formica, the ranking member of the General Assembly’s Appropriations Committee, told the Hartford Business Journal, “There’s going to be a big need for revenue,” adding, “I’m sure there is going to be a big discussion on sin taxes in the long session starting in January.”

The gaming tribes have also noted that neighboring states that offer sports betting and online lottery sales have now gained a competitive edge.

Governor Ned Lamont supports a comprehensive bill that takes in not only sports betting, but other gaming-related issues such as allowing a commercial casino in Hartford. But he has hinted that he might support a single issue bill addressing sports betting.

Majority Leader Rep. Matt Ritter told the Journal, “I’m kind of at my wits end with everything going on with our casinos. We need to move into the 21st century. The fact that we do not have sports betting is beyond silly.”

Ritter supports giving a piece of the pie to all of the stakeholders, but with the tribal casinos getting the lion’s share of the revenue. “I fully support it, and at some point I’m not going to negotiate behind closed doors for months on end,” he said. “I will just put it on the floor, people can vote any way they want. At this point, I’m sick of having backdoor conversations.”

Connecticut Lottery Corp. CEO Greg Smith argues that the lottery should be in charge of sports betting, because all profits would go back to the state. He estimates that would be $45 million the first year.