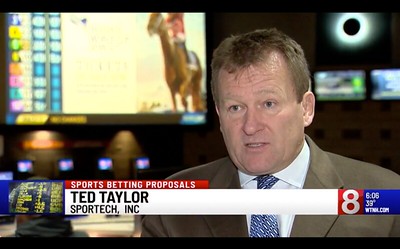 Off-track betting operators in Connecticut argue that they should be part of any sports betting laws adopted by the legislature. One operator, Ted Taylor (l.) of Sportech Venues, says the state’s two Indian tribes “are the roadblock.”

Connecticut’s off-track betting operators are becoming more assertive in arguing that they have a right to a piece of the action as it relates to sports betting.

They are also more willing to call the state’s two gaming tribes, the Mashantucket Pequot and Mohegan tribes, an impediment to a settlement because they insist on a monopoly of sportsbook, which they say is guaranteed by their state tribal gaming compacts.

The tribes own, respectively, Foxwoods Resort Casino and the Mohegan Sun.

One such OTB operator, Ted Taylor, president of Sportech Venues, wrote an Op-Ed in CT News Junkie entitled “The State Must Remove the Artificial Barriers to Sports Betting,” in which he first asked, “So why can’t we get this done when we need revenue from Sports Betting more than ever?” And then answered himself: “Simply, and perhaps surprisingly for the neutral observer, the Tribes are the roadblock.”

Taylor argues that both OTB operators and tribes should be authorized to begin offering sports betting. The sooner the better, he writes, because the state, reeling from the effects of the coronavirus, needs the money from taxing sports betting.

Taylor doesn’t buy that the tribal compacts give the tribes exclusive rights to sports betting because, when the compacts were adopted in the 1990s, the federal government banned sportsbook in all but four states. So the compacts didn’t mention the activity.

The matter of whether the tribes do have this right is a vital one, though, because the compacts obligate them to pay 25 percent of slots revenue to the state. If the state allows a non-tribal entity to offer casino games, they can hold back those payments.

So the legal question is, is sports betting a casino game by the definition of the compacts? A former Connecticut state attorney general, George Jepson wrote an opinion in 2018 questioning the tribes’ position. So have others.

Taylor concludes, “The clear solution is for the State to break the stalemate and license the State’s existing gaming operators, including the Tribes,” adding, “The State will secure additional revenues and consumers will enjoy competitive choice, innovation, and safety in gaming entertainment.”

Needless to say, Mashantucket tribal Chairman Rodney Butler took issue with Taylor’s arguments. He dismissed the piece as “incredibly offensive,” and added, “For a company that is contributing $3 million a year to the state to suggest that we should put $255 million at risk while at the same time they recognize the dire financial situation Connecticut is in is reckless and self-serving.”

He concluded, “As an elected official myself, I would be and should be thrown out of office if I entertained an idea like that.”

Butler does advocate that the state get moving to modernize and “take advantage of existing technology in all aspects of business,” adding, “In the gaming industry, that means online gaming, which is already going on illegally through offshore operators. To the extent there’s one ready-made revenue solution at our disposal, it’s incumbent on government to act.”

The Mohegan Tribe, the other gaming tribe in the state, responded to Taylor’s piece by largely mirroring Butler’s points, but added that the Mohegan tribe already operates sports betting in the properties that it operates in other states.

Mohegan Chief of Staff Chuck Bunnell added, “They do also feel that if it is offered, it must be within existing agreements that have been very beneficial to the state of Connecticut.”

Governor Ned Lamont has been working all year on a possible deal that would include the tribes offering sports betting, but would also extend it to the state lottery and Sportech off the reservation.

Progress on this was interrupted with the arrive of the pandemic in March.