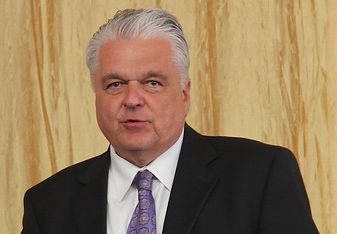 With the nationwide surge in new Covid-19 infections, travel fears are on the rise. That can’t be good for the Las Vegas gaming industry, which is trying to put the pandemic behind it. Governor Steve Sisolak (l.) last week ordered bars to close but allowed restaurants to remain open.

Experts say the recent surge in new coronavirus cases across much of the U.S. will likely induce more gamblers to stay close to home, hampering Las Vegas’ chances of an early recovery.

Southern California, which alone accounts for around 20 percent of visitors to the casino mecca, has recently seen a big jump in infections, causing Governor Gavin Newsome to consider new lockdowns. Newsome closed bars and restaurants in California two weeks ago, and last week, his counterpart in Nevada, Steve Sisolak, closed down bars that didn’t serve food and the bar areas of restaurants that didn’t serve food. Casinos were forced to close down their casino bars and any others without food service.

New cases also have been soaring in other states, mainly in the South and Southwest, where the governments of Texas and Florida, among others, reopened their economies early and aggressively and have had to retrace their steps in the face of record numbers of infections and hospitalizations.

All of which feeds into a broader set of virus fears and makes people more hesitant to fly. A recent survey conducted by Morning Consult commissioned by the American Hotel and Lodging Association found only 44 percent of Americans are planning overnight vacation or leisure travel in 2020.

Clearly, it’s a situation that favors local and regional markets whose casinos tend to be within an hour or two’s drive.

“These properties will limit the amount of people who could come in and limit the amount of slot machines, table games,” said industry analyst Barry Jonas of SunTrust Robinson Humphrey. “But you’re really dealing with your VIP players, those 20 percent of players who make up 80 percent of the revenues. They’re coming back. They’re spending more, and they’re a little more risk-tolerant.”

Conversely, it could prove an impediment to the ability of operators on the Las Vegas Strip to ramp up business the way they hoped.

“Timelines keep shifting, but our expectation is that it’s going to be pushed out further,” said Jonas. “It’s going to be a long time for that destination market to improve, and every uptick in cases around the country is a step backwards.”

Las Vegas’ casinos began reopening on June after a statewide shutdown that lasted 78 days. Since then, results have been somewhat mixed. In the absence of any conventions or meetings trade, weekdays have been slow, according to Jonas, while weekends have outperformed initial expectations.

Anecdotal evidence also suggests that business was comparatively better at casinos that were lax about guests wearing facial coverings. But that in itself has proved problematic, as Governor Steve Sisolak’s recent order mandating masks in all public places, including casinos, has shown.

The order came in response to the fact increasing numbers of casino and casino restaurant employees have been getting sick since the industry reopened on June 4, and Southern Nevada as a whole has seen a spike in new infections. Early last week, the state had racked up 20 straight days of increases in positive test results for the virus, driven principally by results from in and around Las Vegas, and the rate of positive tests statewide has dangerously surpassed 15 percent.

The Nevada Gaming Control, meanwhile, has opened more than 100 regulatory cases against gaming license holders for non-compliance with the state’s Covid guidelines. Yet it requires no standard protocol for temperature checks. Some casinos don’t ask their guests to cool down after entering from outside, where temperatures routinely soar into triple digits. The board does require temperature checks for hotel guests when they check in, but this can be skipped if the customer completes a self-assessment of symptoms.