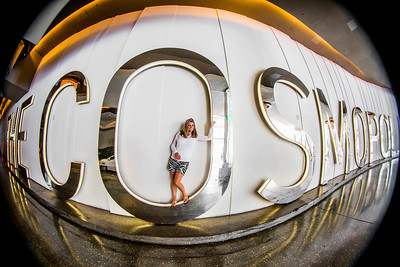 Las Vegas’s Cosmopolitan casino has deployed metal detectors and will filter access to its casino on weekends. This is in reaction to recent violence on the Strip.

The rise in violence on Las Vegas’s Strip has led the Cosmopolitan of Las Vegas to adopt new procedures, including deploying metal detectors and restricting access on weekends.

On weekends, from 6 p.m. to 6 a.m. only those who have a reservation with the hotel or one of the restaurants, or Identity Rewards members, will be granted entry. Guests will be wanded with metal detectors, the resort said in a statement.

In addition, admission will be restricted to a few doors that will also have Metropolitan Police Department officers posted. Bags will be checked and “oversized alcoholic beverages or glass products” won’t be allowed in.

The Wynn Las Vegas and Encore casinos will be scanning guests for metal and screening bags. There will also be additional security guards.

MGM Resorts International spokesman Brian Ahern said its casinos have highly trained security personnel and updates staffing levels every week. He added, “We work very closely with Metro as they work diligently to reduce crime both on the Strip and off. We don’t believe that recent high-profile incidents are reflective of Las Vegas and the safety of our properties on the Strip.”

There has been a rise in violence on the Strip in recent weeks, including a man waving a gun at one nearby casino, the Aria; who was shot and killed by security officers—and a fatal stabbing at the Cosmopolitan itself.

September 27 a person was critically wounded on the Strip and another man was repeatedly shot near the Paris Las Vegas.

On a different date, three people were shot near a liquor store on Flamingo Road, which is near the Strip.

Over the weekend a man was shot at the Miracle Mile Shops. Another victim was hospitalized after being attacked by several people on the Strip.

Several such incidents were caught on video and went viral on social media, ginning up the local reaction.

Although some casinos are reacting to the perception of increased violence, most tourists have not been infected by fear—yet.

CDC Gaming Reports interviewed a tourist who had recently arrived in Las Vegas and was standing in front of the Bellagio fountains at midnight.

The tourist said, “I know Las Vegas has had a couple of issues recently, but I haven’t come across anything that would be alarming. I will say there are a lot more security guards that patrol the Strip now since I’ve been here before. I haven’t come into any encounters where it was an issue.”

The tourist’s remarks appeared typical. A Detroit residents visiting Las Vegas added, “I do feel safe on the Strip considering coming from where we come from.”

Another tourist, this one from Merced, California, commented, “Everyone is taking their precautions, doing what they need to do, wearing the masks. I feel pretty safe out here for the most part. I feel safer here than I would in San Francisco to be honest.”

Casinos that are trying to scramble back to some form of normalcy after reopening from the lockdowns are anxious that the city not suddenly acquire a new reputation for violence.

Barry Jonas, a senior gaming analyst at Truist Securities, told CDC Gaming Reports, “If you are hoping for a Vegas recovery, that is going to be significantly harder with increased crime, whether it is reality or just increased perception.”

The Metropolitan police have added patrols, increased cooperation with casinos on the Strip, and done some enforcements with undercover officers to take some guns off the streets. SWAT teams and Homeland Security officers are also patrolling late nights. They called this 30-day enforcement Operation Top Gun. It resulted in 64 confiscated firearms.

Metro Capt. Dori Koren, who is the commander for the convention center area, recently spoke before the Clark County Commission. “All of us recognize that the Strip, downtown, our tourist corridor is the economic engine of our state,” he said. “It is a top priority.”

Koren said the police are aggressively addressing the situation, but pointed out that violent crimes are actually no higher than normal—except for gun crimes and assaults, which are on the rise. Aggravated assaults have jumped 29 percent over 2019.

The captain said crime stats are “trending in the right direction” and noted that most of the crime in the tourist corridor involves visitors from out of state.

In an USA TODAY interview with Las Vegas Sheriff Joe Lombardo, he noted: “If you look at year-to-date numbers, violent crime on The Strip – and Las Vegas Boulevard in particular – is up 4% compared to last year. That’s through October 3.” The majority of those are aggravated assault, he said.

Lombardo said most metropolitan areas in the U.S. are experiencing similar numbers due to unrest fanned by the Covid-19 lockdowns and the resulting unemployment and lack of entertainment options for younger people.

He said, “Bad behavior, anxiety, unemployment, the inability to blow off steam is causing a lot of this to occur. Our nightclubs are closed, all our live entertainment is closed. There’s not a lot of release occurring not just in our jurisdiction but in Los Angeles and Phoenix and San Diego, where a majority of our visitors come from. They’re in lockdown more than we are.”

The Sheriff added, “We value our visitors. The Strip and gambling and tourism is our No. 1 industry. We can’t be slow to react to any issues associated with that industry. The Las Vegas Metropolitan Police Department – more so, I think, than any other department in the U.S. – is quicker to react to that type of issue. We started tracking this thing significantly in August. We dedicated a significant amount of my total resources to the Las Vegas Boulevard, Strip, Downtown and Fremont Street area.”

Las Vegas Convention and Visitors Authority President Steve Hill told CDC Gaming Reports that the Covid-19 outbreak sparked an upward swing in crime but added, “We have not seen an impact to visitation, nor have our resort partners. We’re all fiercely protective of our destination and committed to ensuring that Las Vegas continues to be a destination where visitors can come, enjoy all we have to offer and feel safe.”