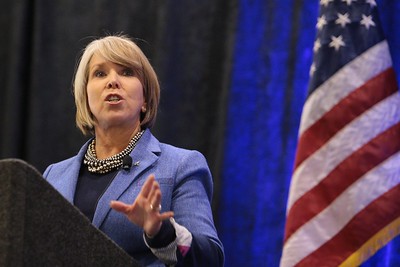 New Mexico’s racetrack industry seems to be dying under the strict lockdown of the industry ordered by Governor Michelle Lujan (l.). No racetrack has been allowed to open for nine months.

After being closed for nine months due to the pandemic, operators of New Mexico’s racetracks say their industry is on the verge of dying.

Recently a racehorse trainer, Todd Fincher, told KTSM 9 News, “I beg the governor [Michelle Lujan] to open the casinos; I mean it’s killing the No. 3 industry in the state, which might never recover. And as long as those casinos have the protocols and the means to keep everyone safe, she should really consider opening the casinos and allowing this industry to come back.”

Lujan’s orders prevent any of the state’s five racetracks from reopening.

He added, “I’m calling my clients and telling them you need to come get your horse, there’s nowhere to take them, it’s going to kill this industry.” It will also hurt the horses, which won’t be taken care of by some, he said. Plus there will be many people put out of work.

He said he may be forced to move to another state where racing is doing better than in New Mexico.

According to Ismael Trejo, executive director of the New Mexico Racing Commission: “Racing is actually flourishing in a lot of other jurisdictions, purses are increasing. They’re parimutuel handle, which is the money that people bet on the horses, are increasing. And it’s a tough pill to swallow when I sit here in Albuquerque reading industry publications and seeing that other jurisdictions are doing well while were struggling quite a bit.”

Trejo added that since slot machines at racetracks contribute 20 percent of their profits to the industry that racetracks are doubly hit by the pandemic.

He said, “So, with the slot machines being shut down since March 16, 2020, no money has been generated for purses. So now the problem becomes multifold: not only are we dealing with the pandemic and safety issues; no racing is facing a very significant challenge with having money to run for.”