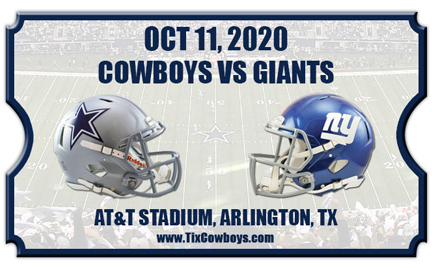 The New York Giants dropped to 0-4 after a 17-9 loss to the Los Angeles Rams. The contest showed that the New York defense isn’t so bad.

The Dallas Cowboys fell to 1-3 after a 49-38 loss to the Cleveland Browns. The NFC East is still wide open with the Philadelphia Eagles leading the pack at 1-2-1.

Get the best bets for the upcoming NFL season at BetQL.co. In the past year, its 5-star (max-value) bets have won 61% of the time!

The NFC East might be the worst division in football. No, check that, they’re absolutely the worst division in the NFL. The Philadelphia Eagles are actually in first place after upsetting the San Francisco 49ers Monday night, 25-20. It was their first win of the season, so the Eagles are 1-2-1. The Eagles aren’t that good, and if anything, they were vastly overrated coming into the season. The biggest disappointment by far in the division, and the NFL overall, is the Dallas Cowboys.

The Cowboys (considered a Super Bowl contender at the start of the year) are off to a horrible 1-3 start. They were embarrassed in Week 4 by the Cleveland Browns, who scored 49 points against them in a 49-38 loss. Dallas has the worst defense in the NFL. They allow a whopping 36.5 points per game, which is dead last in the league. They give up 430.5 total yards per game, which is 30th, and 172.5 rushing yards per game, which is 31st. They can’t stop a nosebleed, as former New York Jets linebacker Bart Scott famously said about the New England Patriots a few years ago.

Fortunately for the Cowboys, they face a New York Giants team that has no offense. The New York offense is so bad that they might actually make the Dallas defense look good. The Giants are 0-4 and they’ve just been terrible. Their offense, as mentioned, is nonexistent. They’ve scored less than 10 points in each of their last two games. They average a league-worst 11.8 points per game and are last in total yards per game. They’re second-to-last in rushing yards per game and fourth-worst in passing yards per game.

Second-year quarterback Daniel Jones has regressed after a pretty promising rookie campaign. While the Giants lost star running back Saquon Barkley for the season, they still have some decent weapons at receiver and tight end, but the offense hasn’t clicked at all with Jones. Giants fans are going to start getting impatient with their quarterback if he doesn’t start living up to his promise.

Just What the Doctor Ordered

The Cowboys are 9.5-point favorites in the early lines, and they should be able to cover. While their defense is bad, their offense is awesome. Dak Prescott has been on fire and they have weapons all over the place from Ezekiel Elliott, Amari Cooper, and rookie CeeDee Lamb. They average 32.5 points per game, which is third in the NFL and are first in total yards and passing yards.

The New York defense is improved, but they won’t be able to slow down Dallas. The Giants are just what the Cowboys need to get back on track after a bad start.

Look to iGamingPlayer.com for up-to-date betting odds, information and analysis. Subscribe below today, and we’ll deliver to your inbox every week.