Cowboys vs. Giants: Your Picks Here 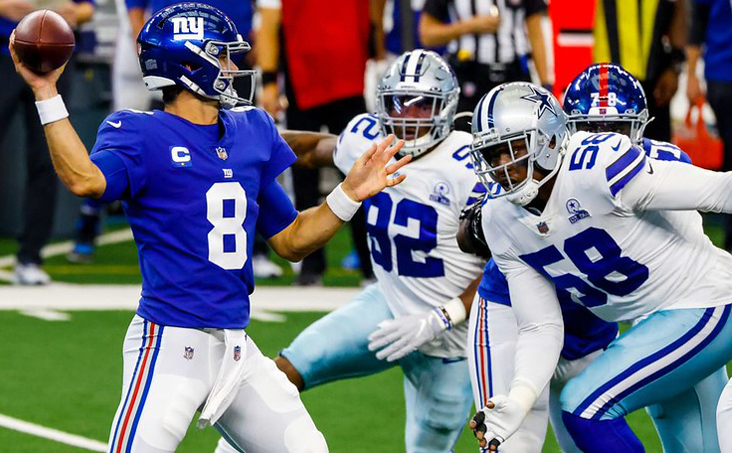 A New York Giants win on Sunday, combined with a Washington Football Team loss, will give the G-Men the NFC East crown and make the Giants the most undeserving playoff team in NFL history.

With the NFC East potentially on the line, the January 3 game between the Dallas Cowboys and New York Giants is set to be an exciting one.

The Cowboys and Giants will be playing with their seasons on the line, but they’ll need a bit of help afterward. The drama is set as the winner of this early Sunday contest will win the division if the Washington Football Team loses to the Philadelphia Eagles in the Sunday Night Football game. Of course the NFL would set it up this way.

While the Cowboys are underdogs to win the division, they opened as a virtual pick’em against the Giants in this game. The line has swayed a bit since opening, but there’s plenty that you should know before wagering on this one.

Who Will Win the NFC East? It’s Still a Toss-up

If the Giants win on Sunday and Washington loses, the G-Men will nab the NFC East crown and a home playoff game. Of course, after winning four straight games to get back into the playoff race, the Giants have dropped three in a row and even worse, they’ve lost all three by at least 14 points, looking very much like a 5-10 team. This has the Giants failing to cover in three-consecutive contests as underdogs.

New York (+300) offers the best return on investment to win the NFC East.

The Giants offense has been the culprit during the team’s three-game losing streak. Whether it’s been Daniel Jones or Colt McCoy at quarterback, the team isn’t going anywhere offensively. Going back to their winning streak, they’ve scored less than 20 points in five-straight games. Only their MetLife Stadium brethren have scored fewer points this season.

For what it’s worth, Jones had a decent performance through the air against the Baltimore Ravens last week. However, the running game is struggling behind a woeful offensive line that has allowed 48 sacks in 15 games this season.

Defensively, the Giants are hanging in as much as possible. They didn’t have any answers for the Ravens rushing attack last week. For the most part, the New York defense is playing its part considering how little they produce on offense. In fact, last week’s game was the first time in several weeks that the Giants were pushed around in the trenches.

The combination of an anemic offense and high-powered defense has created low scores almost nonstop. The under has hit in six-straight Giants games.

It’s been a topsy-turvy season for the Cowboys, but they enter Week 17 with a chance to win the NFC East. Dallas has rattled off three straight wins, including four wins in six games to get to 6-9 but, since they were swept by Washington this year, Dallas needs a win over New York and a Washington loss in Week 17 to win the NFC East and get a home playoff game.

Dallas (+220) is considered the second-favorite behind Washington (+105) to win the NFC East, per BetMGM.

Friday-Sunday NFL Offer at BetMGM.com: Bet $1, Win $100 if any team scores a TD on Sunday! Winners are paid in free bets.

It took some time, but Andy Dalton has taken the offense back to where it was before Dak Prescott’s injury. Because of this, the over has hit in four of their last five games. Remember, the Cowboys were lighting up the scoreboard with Prescott. Also, Dalton has proven many times that he can lead a team to the playoffs and the Cowboys are averaging 36 points per game over their last three contests thanks to seven touchdown passes and just one interception by Dalton. Meanwhile, Ezekiel Elliott has started to find his groove with Tony Pollard producing as the backup. The running game has given the Dallas offense the kind of balance they need.

On the other side of the ball, the Cowboys defense has tallied a few decent performances in recent weeks. For the record, Dallas has given up the third-most points in the NFL this year. However, they’ve forced 10 turnovers over the last three games. In fairness, the Cowboys have done that against Brandon Allen, Nick Mullens, and Jalen Hurts. But forcing turnovers is technically one way that the Cowboys are able to get stops defensively, and with the offense on track, they don’t need that much from their defense to win games.

If we flash back to the first meeting between these teams, Dalton was the hero after Prescott suffered his devastating injury. The Giants scored 34 points in that loss thanks to four field goals and a defensive touchdown. That point total will likely be hard to replicate, meaning it’ll be up to the New York defense to keep Dalton and the Dallas offense in check, forcing a low-scoring game that could go either way.

Cowboys vs. Giants: Where to Watch

The Dallas Cowboys will meet the New York Giants Sunday, January 3 at 4:25 p.m. ET at AT&T Stadium in Arlington, Texas. The game will be broadcast on Fox-TV.

The Washington Football Team will play the Philadelphia Eagles Sunday, January 3 at 8:20 p.m. ET at Lincoln Financial Field in Philadelphia. The game will be broadcast on NBC-TV.