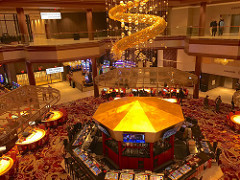 The hapless Lucky Dragon Las Vegas failed to attract a buyer at auction last week, leaving the shuttered off-Strip hotel casino in the hands of its principal creditor.

San Francisco developer Enrique Landa’s Snow Covered Capital took ownership of the 203-room, 2.5-acre property on West Sahara Avenue after no takers were found at an opening price of $35 million.

Following the October 30 auction, which was held in Las Vegas, Landa described the Lucky Dragon to the Las Vegas Review-Journal as “a very well-built property” that “did not have the right business plan.”

“We think it has a bright future, and in the hands of the right operator, I think this will be very successful,” he said.

Asked when it could reopen, he said, “I don’t know.”

Michael Brunet, a consultant for Snow Covered Capital, said the repossession was “not an unexpected outcome.”

“We’re going to find a new owner for it. It’s going to reopen someday, and it’s going to be a very successful property.”

John Knott, who heads CBRE’s global gaming group and is working with SCC to sell the resort, was similarly optimistic, saying prospective buyers now have more time to study the property, arrange financing and come up with a business plan.

As the first ground-up casino built in Las Vegas since the recession, the Asian-themed Lucky Dragon opened to acclaim in November 2016 but quickly ran into trouble after failing to lure its target market of Chinese players in sufficient numbers.

Observers now say the focus was too limited. Lucky Dragon lacked the financial resources to compete with the big Strip casinos on comps and credit, and its remote location, far from the main Strip action, also proved a hindrance, particularly when it came to drawing a Las Vegas locals crowd, which found little to like in its exclusive mix of Chinese games.

Facing dwindling crowds and heavily in debt to SCC for loans to get the property open, developer Andrew Fonfa, founder of Las Vegas ASF Realty & Investments, closed the gaming floor and restaurants in January and filed for Chapter 11 bankruptcy protection in February to forestall foreclosure.

But when no buyers were found Lucky Dragon’s fate was sealed, and the hotel, which had remained open, was shut down last month.