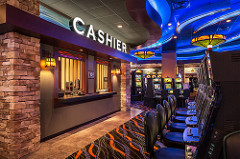 The venue would eliminate a portion of Second Street and change the look of the streetscape. Owners of some of the city’s 11 other casinos expressed concern. Larry Hill, chief executive officer at Triple Crown Casinos, the holding company for the Brass Ass, McGills and Midnight Rose casinos, said, “The truth is we’re all very concerned about the historic nature of Cripple Creek. They are proposing to build a Las Vegas- or Black Hawk-style casino in Cripple Creek. I don’t think anyone wants a glass, steel and concrete structure to be looming over this quaint mining town.”

Hill added Triple Crown supports adding more lodging in the city but it “wants everybody to play by the same rules we have had to abide by for the past 25 years.”

Century Casino and Hotel General Manager Eric Rose said, “The historic character of Cripple Creek is in jeopardy. We either go with a Las Vegas or Black Hawk style or stay with what Cripple Creek has been. We all plan to build more hotel rooms in the future, but not this way. The all-glass front of the hotel is not historic at all.”

Wildwood Casino Managing Partner Joe Canfora stated he’s concerned Bronco Billy’s may not be able to attract new customers, resulting in deep discounting by all the local casinos, especially during traditionally slow winter weekdays. “Cripple Creek is one of the toughest markets I have ever been in, and I have had casinos in Mississippi, Las Vegas, Colorado and Washington state. If they are wrong about the rates they can get, everyone will be biting on each other’s business, and everyone will get weaker,” he said.

John Freeman, co-owner of Cripple Creek Candy, said he favors the Bronco Billy’s proposal. He said the city needs new energy to bring in a younger crowd and new visitors to Teller County. “The overall outcome of bringing in a larger hotel with fine dining with some extra shopping is a step in the right direction,” Freeman said.

Lee stated he hopes the Bronco Billy’s project will attract upscale customers, similar to Ameristar in the Central City-Black Hawk gaming district. The hotel will be built to a quality level that could earn a 4-diamond ranking from AAA or 4-star ranking from Forbes, with room rates starting at $200 a night, he said.

Construction of the parking garage would begin this summer and the hotel in the first half of next year, Lee said, with a 2020 opening.

The full Cripple Creek city council will address the proposal at its May 16 meeting.