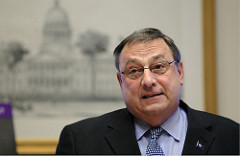 Question 1, the Maine initiative that would, if passed by the voters, prove a $150 million boon for one man and one man only, Shawn Scott, is, as November 7 approaches, drawing fire from state officials, from the highest, Governor Paul LePage, on down.

If passed, Question 1 would authorize Scott to build a casino in York County. It could have up to 1,500 slot machines. Supporters say it would create 2,000 jobs and pay $250 million in taxes its first five years of operation.

The initiative has had a remarkable journey, since the campaign was birthed two years ago with an initial bankroll of $20,000 and a headquarters in several hotel rooms.

Most of that initial $20,000 was paid to the petition circulators who collected signatures, and who came from all over the country, drawn by the promise of $10 per signature collected.

That time they were aiming for the November 7, 2016 ballot. It wasn’t long before the circulators sparked complaints because of their aggressive and some said deceptive tactics and eventually the Secretary of State’s office ruled that more than half of the 91,000 signatures collected were invalid.

The campaign soon shifted its focus to collecting signatures for the 2017 election, and, in the process spent more than $6 million. The source of these funds, which weren’t originally disclosed, sparked the interest of the Maine Ethics Commission, which is still investigating the campaign, and, more to the point, the source of its funding. It is investigating companies, some of them based overseas, owned or associated with Scott and his sister, Lisa Scott, who led the campaign initially, before Scott took it over personally. It has subpoenaed bank records of several companies, such as Scott’s own Bridge Capital.

Maine has seen casino initiatives before. The first one was successfully led by none other than Shawn Scott himself, in 2003. That led to the state’s first casino, which is operated in Bangor by Penn National Gaming, which bought Scott’s interest in the casino for $51 million. The second led to the Oxford casino in 2010, which Scott had nothing to do with.

A year after Scott’s successful campaign, the Laotian government seized a casino that he operated in that Southeast Asian country alleging corruption. In the intervening years Scott has had licensing issues and has been the subject of several ethics probes and multiple lawsuits. For instance, after winning the right to put a casino in Maine, Scott was accused by the Maine Harness Racing Commission of operating a network of shell companies and “sloppy, if not irresponsible financial management.”

The current campaign pits Scott’s Progress for Maine against a myriad of state officials, with Governor Paul LePage at the top of the list.

LePage used his weekly radio address last week to open fire on the initiative, hitting the measure on the fact that “only one person will be able to apply for the gaming license,” and calling it “a stacked deck. Once again, Maine’s referendum process has been hijacked by big money, out-of-state interests hoping to pull the wool over your eyes.”

The Yes on Question 1 ads are taking concentrated fire for making claims that critics say are not guaranteed by the wording of the measure. Such as claiming that it will result in a casino resort, or that money raised will benefit schools and veterans. The slogan on the ads is “say yes to better education and more jobs.”

LePage also claimed that the third casino would merely cannibalize the existing casinos in Bangor and Oxford. “Our casino market is already saturated,” he said. “Opening a casino in York County will not draw new revenue or visitors to the state. It will just shift funds away from our existing casinos” and potentially destroy their viability.

Progress for Maine countered that the governor, “is opposed to a new gaming and entertainment venue given the Republican governor and the GOP’s political action committees have received tens of thousands of dollars from Kentucky-based Churchill Downs and its lobbying arm in Maine” and added that LePage, “needs to think about Maine first and not his friends in Kentucky, because gaming is a competitive industry and Massachusetts is gearing up to capture as much revenue as possible from neighboring states.”

It is iffy how much influence the governor possesses when it comes to initiatives. Last year the five ballot measures he opposed all passed.

Much of the opposition to Question 1—which calls itself A Bad Deal for Maine—is being funded by the owners of those casinos, including Churchill Downs, owners of the Oxford Casino. It has launched an anti-Question 1 website: wickedshady.com, which chronicles the checkered history of Scott and his associates. Progress for Maine points out that Governor LePage has been the recipient of generous contributions from Churchill Downs.

One election factor that could make a difference in defeating Question 1 is the initiative one space down on the ballot: Question 2. This Medicaid expansion measure is expected to generate so much heat that activists on both sides of the issue will show up to vote. The higher the turnout, the theory goes, the less chance Question 1 has.

Several top lawmakers in the state have been so annoyed by the aggressive tactics and shady financing of Question 1 that they are proposing that the stay overhaul its initiative process to make it less susceptible to such campaigns.

Meanwhile, aware that it is operating against a headwind of bad press, Progress for Maine last month hired one of the top guns of election consultants, D.C.-based Goddard Gunster, the same firm that helped the Brexit campaign to victory about a year ago in Great Britain. The campaign has so far paid the firm $574,000 and also has hired former Maine Attorney General Andrew Ketterer for $100,000.