Cuomo: No Casinos in NYC 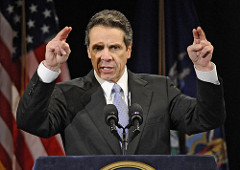 Some of the world’s largest casino operators are showering Albany with glittering dollar signs in hopes of persuading legislators and Gov. Andrew Cuomo to let them set up shop in New York City.

Cuomo, so it appears, is having none of it.

“I am very skeptical about some casino deal put together by casino operators promising billions of dollars and everybody is happy,” the governor told reporters last week.

The three have launched an aggressive lobbying campaign to lift a moratorium on new casinos before 2023.

The restriction dates back to 2014 and was designed to protect the four upstate operators that won competitive bids for licenses to run New York’s first commercially owned casinos. The licenses were granted after voters approved a constitutional amendment authorizing a total of seven commercial casinos as an economic development experiment. Accordingly, the Legislature decided that none of the initial investments could be in New York City. The four