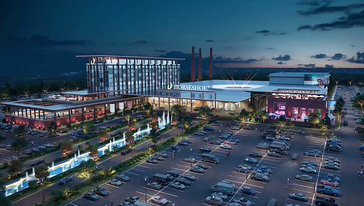 Danville, Virginia and Caesars Entertainment Corp. are discussing a $400 million casino resort (l.) at a former industrial complex. The project could generate $30 million in annual gaming revenue plus $20 million upfront and create 900 construction jobs and 1,300 permanent jobs. A local referendum to approve the project could be held in November.

The city of Danville, Virginia is in talks with Caesars Entertainment Corporation to develop a $400 million casino resort at the site of the former Dan River Mills industrial complex in Schoolfield. The complex would offer a casino floor with 2,000 slot machines, 75 table games, 16 poker tables and a sportsbook, plus multiple food and beverage facilities, 500-room hotel, 35,000-square-foot convention center and 2,500-seat entertainment venue.

“We received several outstanding bids from a variety of companies competing to be Danville’s choice for a resort casino,” Mayor Alonzo Jones said. “The Caesars bid stood out as the best for our community.” “The City Council has three focus areas: reduce crime, improve education, and increase economic development,” Jones said. “This project provides us with an opportunity to significantly improve each of these areas for years to come.”

Analysts estimate Danville would receive about $30 million in annual gaming taxes and supplemental payments from the casino, along with $20 million in upfront payments for land acquisition and public investments. Also, the city would take in $4 million annually in direct additional taxes from real estate, hotel taxes, meals and sales. The project would create 900 construction jobs and 1,300 permanent jobs.

A local voter referendum will be required to approve the casino. That could take place as soon as this November. The project could be completed in 2023.

Danville is one of five cities authorized through legislation passed last year to develop a casino. The others are Richmond, Norfolk, Portsmouth and Bristol, which is partnering with Hard Rock International.

Caesars Chief Executive Officer Tony Rodio said, “Caesars is pleased to emerge from a highly competitive process as the unanimous choice by the Danville city council to build and operate a first-class casino resort in the city. We look forward to working with city officials, as well as the people of Danville, on the next steps to advance a project that will benefit the city for many decades to come. We are excited to bring quality jobs and unforgettable guest experiences to Danville, as we do at our 37 properties across the United States.”

Early last year, Danville hired Convergence Strategy Group, experts in casino gaming throughout the world, to guide it through the process of understanding the impact of gaming and to develop a request for proposal (RFP) process that would be used to select the operator.

“Over these last 10 months, we have worked with a very engaged city administration and elected officials toward one goal: to ensure Danville is offered the best possible development,” Convergence Strategy Group Managing Partner, Suzanne Leckert said. “Today the citizens of Danville should be proud. Several highly qualified and respected companies vied for the opportunity to bring their ambitious, exciting, and job-creating developments to the city. Through the competitive RFP process, each company put forth strong and highly detailed proposals, with the council diligently evaluating and scrutinizing each on its merits and adhering to the selection criteria outlined by the state.”