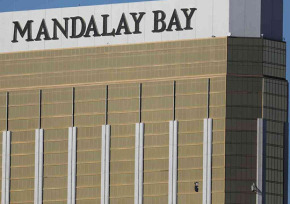 It’s the moment Las Vegas officials have feared for years. As the capital of decadence and excess, it’s long been assumed that it was almost inevitable that Las Vegas would be targeted by terrorist organizations. The fact that several of the 9/11 perpetrators had cased Las Vegas casinos just months before that event was cause for their concern. And just weeks ago before, following the Barcelona incident where a truck mowed down dozens of people in a pedestrian mall, Las Vegas officials speeded plans to install stanchions along the Strip sidewalks.

But no one could ever have predicted who and how mass murder would visit Las Vegas. And the why still remains a mystery.

Stephen Paddock did not fit the profile of a terrorist of a mass murderer. Paddock, 64, was a retired real estate investor and a gambler. He brought almost 20 weapons into a room he checked into at Mandalay Bay four days earlier. The room overlooked the site of the Route 91 country music festival that had been running for three days, and was scheduled to end around 10 p.m. on Sunday, October 1.

Just before 10 p.m., Paddock broke two windows in the suite he was occupying and opened fire with automatic weapons from his perch on the 32nd floor of Mandalay Bay. With 22,000 people attending the festival, Paddock sprayed bullets throughout the crowd. It took a few minutes before the crowd realized what was happening, and began to scurry for the exits. In the end, 59 people were slain and almost 500 injured. Not all the injuries were gunshot wounds, some victims were trampled.

SWAT teams were directed to the shooter’s suite by a Mandalay Bay security guard who had been shot in the leg by Paddock, who killed himself before police could halt him.

Las Vegas hospitals were overwhelmed with victims who arrived via ambulances, pickup trucks, cars and taxis. Heroic efforts protect fans and to remove victims from the festival site were later recounted by the media and witnesses.

Many casinos on the Strip advised guests to shelter in place, while those closer to the shooting moved guests into safe locations.

MGM issued a statement following the shooting the next day and announced a $3 million donation to victims and families.

“There are simply no words to express our grief and outrage over this senseless and horrific attack on our community,” said Jim Murren, chairman and CEO of MGM Resorts. “Yet in this devastating time, we are inspired. From the heroic stories of victims on the ground who placed the safety of strangers and loved ones before themselves, to the incredible bravery of first responders who rushed in when others were rushing out and who surely lessened the damage, to the knowledge of so many good and incomplete works done by those we lost—we are collectively drawing strength and faith to meet the difficult days ahead. With this donation, we hope to make a difference to those who were harmed and those who are left behind.

“We also wish to recognize the awesome contributions of first responders, not just here in Las Vegas but around the U.S., who give so completely of themselves when disaster strikes. On behalf of our Las Vegas community, I wish to say thank you to our global community who remind us from moment to moment that we are not alone.”

Still unknown—and something that may never be known—is the motive of the shooter. Although ISIS claimed responsibility for the violence, officials contend there is no evidence that Paddock had been radicalized. No note or letter has been found, and there has been no information yet about contents of his computer or his home. His Mesquite, Nevada, home was quickly locked down.

It quickly became know that Paddock was a known gambler, sometimes reportedly winning or losing $100,000 or more in a session. A video poker player, he had played in the Mandalay Bay high limit slot room just days before the shootings. It’s unknown at this time whether the suite Paddock was using was comped or not.

Paddock lived in Reno for several years where he met his girlfriend who had been a slot host at the Atlantis casino hotel.

The reaction from the Las Vegas community was extraordinary. A GoFundMe campaign for victims and their families raised more than $6 million in two days, far exceeding the $2 million goal. Blood donation centers had six-hour waits. President Donald Trump visited the victims in hospitals and praised first responders.

Instead, Vassiliadis said a social media campaign stressing the #VegasStrong hashtag was launched.

“We’re going to let people know that we are strong, and that we’ll be coming through this and coming out of this in a strong fashion,” he said. “A lot of people spent a lot money and a lot of years building this world-class destination. We’re not going to let one lunatic ruin it.”