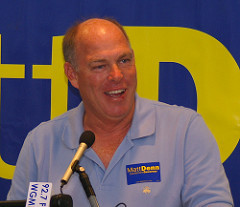 Two months after the Delaware State Senate approved a bill to aid the state’s three struggling racinos with $20 million in annual breaks on taxes and fees, the speaker of the state House is finally ready to move on the package—well, on half of it.

Delaware House Speaker Pete Schwartzkopf, one of the lawmakers who has been at the center of delays to the aid package—which many call a “bailout” for private industries—last week reiterated that he is not convinced the tax breaks are a wise move, but that he is willing to move the bill to a vote if the chamber passes an amendment to slash the relief package in half.

“Surrendering that much money to three private institutions means there would be less money for various programs benefiting seniors, students and people with disabilities, as well as adequately supporting correctional officers, probation and parole officers and other state workers,” Schwartzkopf said in a statement last week.

“But despite my reservations, I have to balance those concerns against the simple fact that the state of Delaware is a business partner with these casinos. They employ thousands of workers, which means thousands of families would be impacted if they are forced to close or lay off people.”

Senate Bill 144, approved by the upper chamber in April, would change the state slot revenue tax from 43 percent to a sliding scale ranging from 32 percent to 43.5 percent, slash the revenue tax on table games from 29.4 percent to 15 percent, and eliminate the annual $3 million table-game licensing fee.

The amendment to the bill filed last week by Schwartzkopf would cut the table-game tax to 15.5 percent, and eliminate the table licensing fee, but would leave the slot tax, one of the highest in the nation, untouched. The total relief to casinos would end up around $10 million annually. Schwartzkopf said he feels this would be sufficient, considering the addition of full-blown sports books, which went live this month.

“With this structural change and the addition of sports betting, which should attract more patrons and provide even more revenue for the casinos, there would be no reason for them to seek additional relief for years to come,” Schwartzkopf said.

The three racinos have been begging the state for tax relief for years, as they have been struggling against new competition in Maryland and Pennsylvania. So far, the legislature has shot the request down every year since the formation of a blue-ribbon panel of state and industry officials first proposed the tax breaks four years ago.