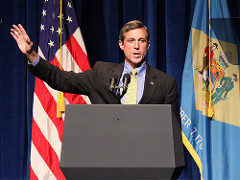 Delaware became the 14th U.S. state to legalize and regulate daily fantasy sports when Governor John Carney signed a DFS bill into law, while a DFS bill in Maine has cleared the state legislature.

Delaware Governor John Carney signed a bill that cleared up the DFS issue in a state where the wagering had generally been considered illegal. The Delaware law imposes a $50,000 license fee and a 15.5 percent tax on gross gaming revenue from DFS sites.

Observers say the high fees and taxes are likely to shut out most operators other than huge sites FanDuel and DraftKings, which had been shut out of the state previously. It is the highest fee and tax structure for DFS so far in the U.S.

Under Delaware’s new law, the governor will choose the department charged with regulating the new DFS business, and that department will draft regulations. Consumer protection written into the law include language regarding truth in advertising, responsible gaming protocols, and separate of player and operational funds.

Residents must be at least 18 years old to wager on DFS sites, and the law bans contests based on college or amateur sports events, as well as horse racing. The law sunsets in 2019, when the government will call for a report on recommendations to revise the law.

Meanwhile, the Maine legislature approved its own DFS bill, sending it to the desk of Governor Paul LePage. There was no indication from LePage on whether or not he will sign the bill, according to DFSReport.com.

In Massachusetts, a special commission created to look into online gambling and daily fantasy sports has released a draft of its final recommendations. The commission recommended permanently legalizing DFS, but recommended DFS be classified as online gaming.

DraftKings disputed the classification of DFS as online gaming, saying in a statement, “DraftKings is proud to call Boston and Massachusetts home. We have more than 300 employees from 79 cities and towns across the state, and while we are committed to growing and innovating here, this provision, if adopted, could impact our ability to do that.”