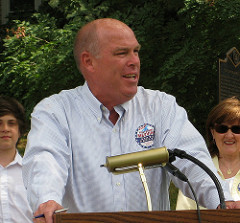 A familiar pattern is unfolding in the Delaware state legislature, with a measure to grant tax relief to the state’s three struggling racinos easily passing the Senate under the sponsorship of state Senator Brian Bushweller, only to face a skeptical audience in House Speaker Pete Schwartzkopf.

The three racinos—Delaware Park, Dover Downs and Harrington Raceway—have been begging the state for tax relief for years, as they have been struggling against new competition in Maryland and Pennsylvania. So far, the legislature has shot the request down every year since the formation of a blue-ribbon panel of state and industry officials first proposed the tax breaks four years ago.

SB 144, easily passed by the Senate last month, would change the state slot revenue tax from 43 percent to a sliding scale ranging from 32 percent to 43.5 percent, slash the revenue tax on table games from 30 percent to 15 percent, and eliminate the annual $3 million table-game licensing fee.

Last week, Schwartzkopf said in an interview with the Delaware Public Media radio network that the Senate bill represents “a governor’s negotiation” with the casino and horse-racing industries. Citing state Finance Secretary Rick Geisenberger’s estimation the bill would cost the state $15 million in the next fiscal year, Schwartzkopf said the casino tax break should take a back seat to other state concerns.

“We just had teachers in here asking for more money for their classrooms and things like that,” he said in the interview. “(State Rep.) Larry Mitchell just stood up on the floor and talked about how low the salaries are for probation and parole. The more money we give to the casinos takes away from the money we can do to try to fix some of the other problems we have in our state.”

Schwartzkopf also said the U.S. Supreme Court decision eliminating the federal ban on sports betting means the state will be getting more revenue from sports books, which puts the need for the tax break into question.

Bushweller has argued that failing to grant the casinos tax relief puts 3,000 jobs at risk, as Dover Downs and others have threatened layoffs if the tax structure is not altered.