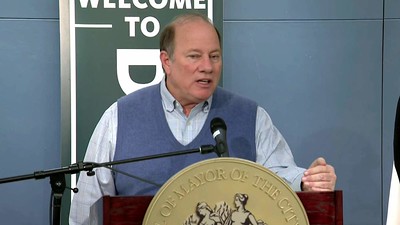 Detroit’s three casinos, which shut down March 17, have pledged to pay their 19,681 employees at least through the end of the month. Detroit Mayor Mike Duggan (l.) said the city is losing $600,000 daily in casino revenues and hopes FEMA will compensate the city for losses.

According to Detroit Mayor Mike Duggan, the city is losing $600,000 a day in casino revenue and has spent $11 million in response to the coronavirus. Under normal circumstances, the city’s three casinos contribute $200 million annually to the city’s $1 billion general fund.

In addition to the three Motown casinos—the MGM Grand, Greektown and MotorCity—Michigan’s other 23 casinos also have closed. The properties could lose a total of $1 billion-plus if they remain shuttered for the eight weeks recommended by the Centers for Disease Control and Prevention.

Detroit’s recently opened sportsbooks also are closed; these closures are estimated to cost the three casinos more than $10 million in revenue. Wagerers may return betting slips for games that didn’t happen, as well as for future over-unders.

Duggan said the loss of casino revenue “is something we’re going have to deal with. Right now, we’re not under any pressure that any other city or state or any business isn’t under. But we gotta beat this virus, and then when we beat the virus we’ll deal with our financial problems.”

The three Detroit casinos have pledged to pay their 19,681 employees at least through the end of the month.

On March 23, Michigan Governor Christie Whitmer issued a shelter-in-place order limiting travel outside home for at least three weeks. All three casinos have donated thousands of pounds of food to local food banks; MotorCity and MGM Grand also donated thousands of gloves to DDOT bus drivers and Greektown offering its space for makeshift hospital use.