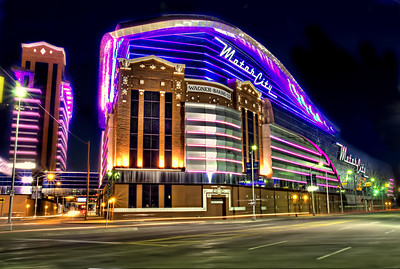 Detroit's three casinos—MotorCity (l.), MGM Grand and Greektown—were allowed to reopen over the weekend under an executive order issued by Michigan Governor Gretchen Whitmer. Occupancy is limited to 15 percent.

In Detroit, nearly 100 people waited in line overnight to walk through the doors of Motor City Casino when it opened at 10 a.m. August 5. The same scene was repeated at Greektown Casino-Hotel later that day and at MGM Grand on Friday, August 7. The casinos had been closed since March 16 due to Covid-19.

Under an executive order issued by Governor Gretchen Whitmer, capacity is limited to 15 percent, among the strictest limits in the nation (several tribal casinos in Michigan, which are not subject to state rules, reopened at 80 percent capacity).

That limit means Motor City can admit 1,600 patrons, Greektown can allow 1,400 and MGM Grand can accommodate 1,800. In her executive order, Whitmer said, “Casinos have been operating safely across most of the country and in tribal areas in Michigan, and should be able to do so in the Detroit region as well.”

Regarding the 15 percent maximum occupancy, Greektown Casino-Hotel Vice President and General Manager John Drake noted, “It’s a figure that casino executives proposed to the state as part of the reopening strategy. It’s certainly something that we’re comfortable with from an opening standpoint and certainly demonstrating that we know we have great protocols hopefully we can move beyond that in the not too distance future.”

Among other new rules, casino patrons must submit to health screenings before they’re allowed to enter. Masks are required. Every other slot machine is closed and table games may accommodate only three people at a time; Plexiglas dividers have been installed at the tables.

In addition, visitors may not smoke or vape on the gaming floor, though they can do so in new specially designated outdoors areas. Casino-floor bars remain open, but customers must be seated to drink—they can’t stroll while holding a cocktail. Also, poker rooms, buffets and valet restaurants are closed. Hand-sanitizing stations are located throughout the facilities.

Greektown Chief Community Officer Marvin Beatty said, “We’ve done a tremendous amount of cleaning. All of our chips have been washed. Everything is fresh and ready to go. Recognizing that the precautions are essential to ensure the safety of our team members and our customers, we’ve gone through every single protocol to make that happen.”

MGM Grand Detroit President and COO David Tsai stated, “Together with the other two Detroit casinos we felt like we wanted to take a conservative approach in terms of the protocol that we’re agreeing to. We want the opportunity to demonstrate that you can open a business and do it safely. We will be enforcing these protocols and enforcing compliance.”

Tsai added, “I think that one of the things that’s interesting is with casinos, we are in a position to probably enforce a lot of these regulations more than other industries because we are a highly-regulated business. We’re used to enforcing strict rules.”

Tsai said the new BetMGM Sportsbook will be open for wagers but the lounge will remain closed. Only the Tap Sports Bar and National Coney Island restaurants will be open at first; Wolfgang Puck Steak, Red Sauce Pizza, Bamboo Asian Cuisine, Olga’s Kitchen and others will remain closed. “Over time, as business demand grows, or our 15 percent capacity restriction is relaxed, we will look at opening additional outlets and bring more team members back to work,” Tsai said.

MotorCity Casino Hotel President Bruce Dall pointed out, “There won’t be any eating inside the casino because you have to lower your mask. You have the opportunity, quite frankly, to order drinks though the slot machine. A cocktail server will bring it to you in a disposable glass, and when you’re seated at a machine, you can drink it if you pull your mask down, take a sip, pull your mask back up.”

The city of Detroit and the state of Michigan can expect lower gaming tax revenue to come from the casinos. Before the Covid-19 shutdowns, the city took in about $600,000 in daily tax revenue from the three properties. Now, Detroit’s Chief Financial Officer Dave Massaron, said, “In our budget, we assumed we would be receiving $3 million per month in early months as the casinos reopened. At this point it is unclear that revenues will be at that level.”

The Detroit casinos posted year-to-date combined revenue of $299.2 million through June, a decline of 59.3 percent compared with $735.4 million for the same period in 2019, according to the Michigan Gaming Control Board.

The three casinos employ a total of about 7,000 workers but at this point they’ve called back about 40 percent to 50 percent of their workforces for the initial reopening. MotorCity’s Dall said, “Most importantly, this decision allows us to initially recall up to 50 percent of our staff, providing critical employment and health benefits.” He said the casino is extending health benefits through August 31 for workers not yet recalled. MGM Grand Detroit officials said 1,200 of its 2,800 employees have been called back to work. Greektown will bring back around half of its 2,000 employees, MGM will recall about 1,200 of its 2,800 employees and MotorCity will call back half of its 2,500 workers.

MotorCity’s hotel reopened August 7. MGM Grand’s hotel and Greektown’s will reopen in September. Cash will not be accepted as payment for hotel rooms, only authorized credit cards.