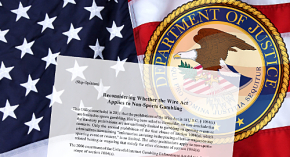 The U.S. Department of Justice’s Office of Legal Counsel released a 23-page opinion on January 14 that reverses a 2011 opinion that the Federal Wire Act applies only to sports betting. The move could put the iGaming market into question, according to CDC Gaming Reports.

The new opinion could apply the Wire Act to any type of gambling that crosses state lines, including online gaming.

New Jersey, Nevada and Delaware legalized online gaming after the 2011 ruling. Nevada’s online gaming is limited to poker, and the state’s market only has one player: Caesars Entertainment.

New Jersey’s iGaming business is the most active. The state’s gaming revenue from online wagering reached $298.7 million in 2018, a 21.6 percent increase over 2017, according to the New Jersey Division of Gaming Enforcement. Online gaming has generated more than $1 billion in revenue since its launch in 2013.

Nevada, Delaware and New Jersey have interstate online gaming agreements that allow online poker players to compete across the three states. Pennsylvania’s legislature has legalized iGaming, but sites have launched slowly in the state.

Caroline Ponseti, American Gaming Association spokeswoman, said the organization is “reviewing the opinion and the implications to the casino gaming industry, consumers and the eight states that currently offer legal, regulated sports gaming.”

Eilers & Krejcik Gaming analyst Chris Grove said the opinion places “many conflicting aspects” into play.
“It’s our belief that we’ll see the heart of this issue head to the courts sooner rather than later,” Grove said. “The opinion seems to create more headaches for products that clearly share liquidity across state lines. We also expect it to further delay Pennsylvania’s rollout of online casino gambling.”