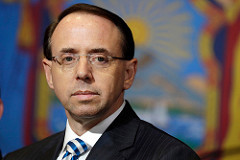 The U.S. Department of Justice issued a new interpretation on the 1961 federal Wire Act that called into question the legality of all online gambling nearly two weeks ago and the gambling industry seems no closer to figuring out its impact than on the day it was announced.

The new DOJ opinion found that the Wire Act does not apply only to sports betting—as the 2011 opinion found it did—and could be applied to any form of online gambling where information is transmitted across state lines, including on the internet.

Though the opinion does not carry the weight of law, it immediately called into question the legality of online lotteries and online casino gambling and poker. It could also have serious implications for daily fantasy sports, which nearly always is conducted across state lines.

U.S. Deputy Attorney General Rod Rosenstein issued a memo calling for the new opinion not to go into effect for 90 days to allow the gambling industry and states to adjust to it. However, Rosenstein characterized the memo as exercising prosecutorial discretion and not offering “safe harbor” for violations of the Wire Act. He also did not indicate how the industry and states should do to adjust.

But with so many interpretations floating around about the opinion, it seems certain that court action will be needed to sort things out.

For example, online lotteries and online gaming are limited to players within state boundaries. However, if any information is transferred across state lines—such as ticket purchases on national lotteries such as PowerBall and Mega Millions—they could run afoul of the DOJ opinion. Also at risk is an agreement between Nevada, New Jersey and Delaware to pool online poker players from the three states.

Mark Hichar, a Wire Act expert and a shareholder at Greenberg Traurig LLP, offered this explanation to Online Poker Report.

“The opinion will affect not only iLottery and iGaming and the interstate poker compact among Delaware, Nevada and New Jersey), but it will also affect traditional lottery purchases via brick-and-mortar retailers,” Hichar said. “Language in the opinion supports the position that such intermediately routed transmissions are sent in ‘interstate commerce.’ Thus, lottery purchases—whether via traditional retailers or via PCs or mobile devices—and iGaming wagers, that originate in a state and are processed in the same state, but are routed intermediately out of the state or, according to some court cases, are merely sent via the internet without regard to their travel route could violate the Wire Act.”

“I expect that there will be litigation within that 90-day period,” he said, “as states sue the federal government seeking a declaratory judgment that the Wire Act applies only to sports betting.”

Analysts also point out that payments to gamblers from sites could also be routed to out-of-state processors.

Many analysts also think that until the outstanding issues are settled, states will be reluctant to implement online gambling. Still, Rhode Island has recently introduced a new bill to allow online gambling and no existing operations—either for online lotteries or casinos—have been reported to curtail their operations in any way.

While the Wire Act ruling has rattled more than a few cages in the U.S. iGaming world, some regulators are viewing the reinterpretation as a minor inconvenience.

One of those is the Pennsylvania Gaming Control Board.

The Pennsylvania board released a statement last week to the Penn Bets website that indicates the state’s newly legal online gaming market will proceed as planned, noting that initial operations, at least, will be completely intrastate, with online wagering contained through geofencing technology.

“We must thoroughly review and discuss the opinion to gauge any ramifications to gaming activities in Pennsylvania,” the statement from PGCB spokesman Doug Harbach said. “Meanwhile, as Pennsylvania’s current gaming is all intrastate and legal within the borders of the state, we will continue to regulate the legal forms of gaming as provided for in the Gaming Act.”

The board is currently involved in setting up the online gaming business, examining payment processing, server locations, live dealer games and other issues. The state lottery, which has initiated online sales, did not issue any statement on the opinion, but that wagering also is conducted completely intrastate.

In a letter last week to its casino licensees, PGCB Executive Director Kevin O’Toole said that all forms of gambling in Pennsylvania must be “entirely intrastate.”

“It is your obligation to comply with the federal law in all respects in establishing your gaming operations which now must be entirely intrastate,” O’Toole wrote in the letter, dated January 18.

The casinos were given 30 days to “provide plans” for complying with the new DOJ interpretation of the law, enacted in 1961, long before the internet existed.

Before the new Wire Act memo, Pennsylvania was permitting “interactive gaming devices and associated equipment” to be located outside of the state. That plan is quashed for now, as well as pooling players with other states in online poker—at least until the new opinion is challenged in the courts.

“While we fully recognize that this change may alter the plans of licensees in implementing expanded gaming offerings, it is a change not of the board’s making but one commanded by the changing interpretation by federal law enforcement authorities,” wrote O’Toole.

In West Virginia, however, the ruling had a chilling effect.

Currently state lottery players can cash winning keno tickets at any retailer but they only can buy them at clubs and bars licensed by the Alcohol Beverage Control Administration. State Del. Steve Westfall’s H 2184 would change that to allow players to buy keno tickets at convenience stores and other locations.

Additionally, Westfall’s and Del. Paul Espinosa’s H 2191 would allow limited video lottery distributors to act as retailers, which would help lower-performing outlets remain viable. Currently distributors and retailers share 50 percent of LVL profits and the lottery keeps the other half. “By splitting that, it makes it more difficult to make those marginal locations work,” Lottery Director John Myers said.

Regarding online casino gambling, Myers said, “We certainly see the opportunity in iGaming. We fully intend to come back with that at some point.” That point would be after the state’s five casinos’ sports betting apps are operating, he said.

On another front, many in the industry feel that there has been an overreaction to the opinion. Headlines at many news sites read that the DOJ opinion outlawed all types of online gaming.

However, the three states that allow online gaming—again Nevada, New Jersey and Delaware—only allow bets by players within the state’s borders as do most online lotteries. Since such gambling is completely held within the state, some analysts found the opinion to be irrelevant and said worries about information and payments being routed to out-of-state processors overly pessimistic.

However, such bills have gained little traction before as many officials see them as infringing on state’s rights. Given the current battles being waged in Washington, few analysts expect Congress to address the issue any time soon.