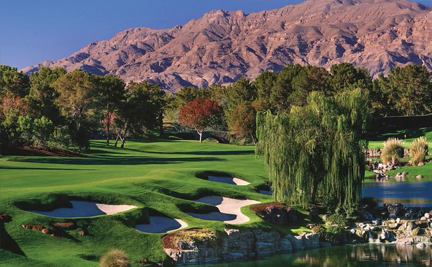 For the second week in a row, the PGA Tour is stuck in Vegas. But this time, the luxurious Shadow Creek Golf Course (l.) will host most of the top professionals in golf.

It’s rare that a city gets two PGA Tour events in a row, but it’s happened twice in 2020, the weirdest of all years.

In July, Muirfield Village in Ohio became the first course to host consecutive PGA events: the Jack Nicklaus Memorial and the Workday Classic. And while it won’t be at the same course, Las Vegas is hosting its second PGA event in as many weeks, the CJ Cup at Shadow Creek Golf Course.

For the past three years, the CJ Cup has been held at the Nine Bridge Country Club in Jeju Island, South Korea. It’s a limited field of 78 with the top 60 players on the tour joined by a selection of elite Korean golfers. It was relocated from Korea for this year due to the effects of Covid 19 on the country. It’s the first time since the U.S. Open a month ago that so many top-flight players have gathered, and it occurs just a month before the Masters in November (still seems strange to say that).

The legendary Shadow Creek course was designed by Tom Fazio and built by Steve Wynn in 1990 as his private course. It’s on 350 acres in what can be a somewhat sketchy area in North Las Vegas. High berms shield it from the surrounding neighborhood, but within the grounds, it’s a joy to behold for any golf enthusiast. Undulating fairways and small greens greet golfers. It was the site of the Tiger Woods-Phil Mickelson match play in 2018, which ended on a chip-shot shootout in the dusk. It’s now owned by MGM Resorts and open for players and a limited number of golfers at a price tag of $500 a round. So the first real tournament to be held at Shadow Creek should be compelling.

Meet your match at PlaySugarHouse.com! Just sign up to place your first sports wager, and you’ll get a 100% deposit match up to $250.

It’s the field that brings in the excitement. Five of the top six players are contending, and it would have been six of six if Dustin Johnson hadn’t tested positive for Covid-19 early in the week. Bryson DeChambeau also withdrew, after enduring a brutal finish at the Shriners Classic last week. We won’t see him again until the Masters.

Let’s start with the “hot” players who have contended over the last couple of months.

All-stars meet Rock Stars at HardRockSports.com. Simply deposit $100 or more and place your first bet of $100 or more. If you don’t win, Hard Rock will hit you back with $100 in cash.

But it’s the elite golfers who have the edge at this event:

So sit back and enjoy the scenery at Shadow Creek and study the games of golf’s best pros. It’s a great tune-up for the Masters—for golfers and bettors alike.