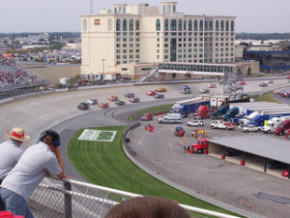 Dover Downs Racetrack, which is part of Dover Downs Casino, began offering betting at its popular NASCAR racetrack, as part of the state’s sports betting program managed by the Delaware Lottery.

A Delaware Lottery kiosk was set up near the Monster Monument at Victory Plaza for the NASCAR weekend.

“They will crunch the numbers. They will be looking closely at qualifying speeds and practice sessions and they’ll come out with odds that reflect who is performing well on the track,” said Camp.

This is the first time in NASCAR history fans can legally bet on a race on location. Multiple types of wagers can be placed on the races including the season championship winner, matchups between manufacturers and head to head matches.

“So, you know, you’ll be able to possibly bet Jimmy Johnson will finish higher than Kyle Bush, for example, and just anything this that will keep you more engaged with the racing on the track we think will be a positive,” said Camp in the Delaware Public Media interview.