HomeThe ShuffleDrinking from the Cup: How to Bet the FedEx Championship

Drinking from the Cup: How to Bet the FedEx Championship 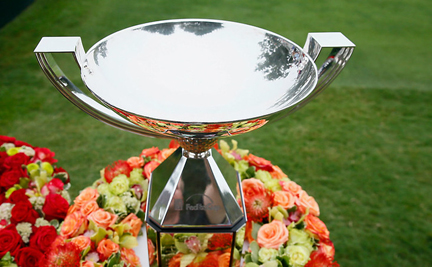 The muted excitement of the FedEx Cup, a three-tournament final for the title of best golfer of 2020, starts this week. Betting golf is difficult, but the FedEx Cup gives your three bites at the apple.

In 2007, PGA officials decided that four majors and dozens of tournaments weren’t nearly enough golf, and more excitement was needed for the sport to thrive. So they created the FedEx Cup, which would crown a champion of the sport.

When the excitement level didn’t soar, they changed the rules, and today’s FedEx Cup looks nothing like it did in 2007. Now we really have something to root for!

This year, the race for the Cup begins at the Northern Trust in Boston with 125 golfers vying to move on to the 70-player BMW Championship outside Chicago. And finally, 30 players remain to attack the Tour Championship at Eastlake Golf Course in Atlanta where the FedEx Cup is awarded.

While players are awarded points throughout the year for winning tournaments, the final three tournaments are so heavily weighted, it’s almost impossible for anyone to win the Cup without taking at least one of the three. Past winners include a who’s who of the golf elite—Rory McElroy (twice), Tiger Woods (also twice), Justin Thomas, Vijay Singh, Justin Rose, Jordan Spieth and others.

For first-time sports bettors, CaesarsCasino.com offers a $10 free bonus, no deposit required. Make a deposit, and Caesars will match your first wager up to $300.

Since the FedEx Cup is usually held after all four majors have been played, it has a place of its own in the golf calendar. But in this year, unlike any other, it’s sandwiched between the PGA Championship in early August and the U.S. Open in September, both way more prestigious wins than the FedEx championship.

So, while the Cup doesn’t excite a casual fan or even the pro golfers, it can become a focal point for sports bettors.

Let’s take the 125 golfers who are competing at this week’s Northern Trust. A win at this event could be all a golfer needs to be crowned the champion with respectable showings in the last two tournaments. Who’s best set up? The usual suspects of course. Bryson DeChambeau, Justin Thomas, Brooks Koepka are seemingly always in contention. But how about a couple of outsiders? Jason Day is back. Once at the pantheon of the golf world, Day has disappointed in the past few years due to nagging injuries. But his Top 5 performances at the PGA and the Memorial are proof that he’s regaining his mojo. But let’s not forget Collin Morikawa, the young phenom who won the PGA and the Workday Open. You can get Day at 23-1 and Morikawa at 25-1. And let’s not forget Patrick Reed, who has been hanging around at the recent tournaments at 30-1.

But when it comes to the FedEx Cup, it’s usually the big names who wind up on top, with a few exceptions.

Going into the Northern Trust, Justin Thomas had a commanding lead of more than 500 points largely a result of his three wins this season, more than anyone else in the top 10. Morikawa is second on the strength of his two recent victories.

Here are the Top 10 in the FedEx Cup standings and their odds:

There are clearly some betting opportunities in the Top 10, but reach a little deeper, to guys who’ve been playing well recently. Gary Woodland (50-1), Tommy Fleetwood (50-1), Harold Varner (100-1) and the winner of last week’s Wyndham Classic, Billy Horshel (66-1) are all a decent bet. The big names? If you bet with your heart, Tiger Woods (40-1) and Phil Mickelson (100-1) will melt it. But some true longshots actually may have a chance. Zack Johnson (200-1) played well in the Wyndham and the PGA, while Keegan Bradley (200-1) can always bust out.

As we mentioned, the field narrows fast after the Northern for the BMW. You’ll get a feel for the hot player, so you can hedge your bets at that point. Don’t be afraid. Go for it.