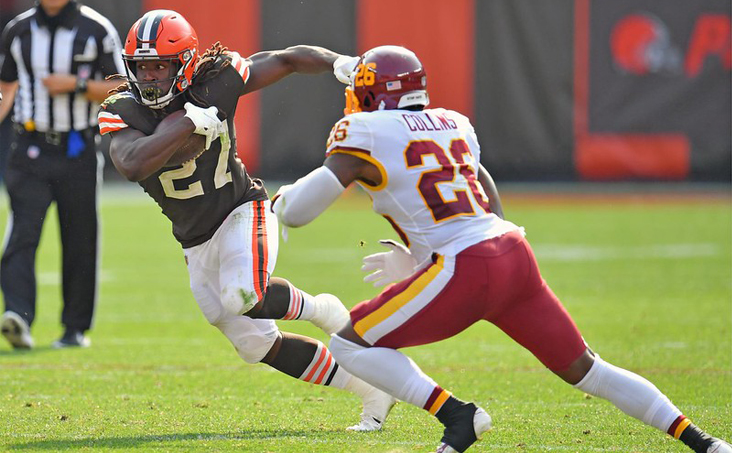 Casual fans might be timid with the prospect of selecting “America’s Team” at -220 after the Dallas Cowboys lost two of their three tough games to start the season. Smart bettors wager on teams and matchups, not records.

After an underwhelming season-opener, the Cowboys have been blisteringly hot in Week 2 and Week 3. Thanks to Dak Prescott’s 450 passing yards and three rushing touchdowns, they put up double-digit points in three of four quarters in a thrilling 40-39 comeback win over the Atlanta Falcons. They then got narrowly out-dueled 38-31 by MVP candidate Russell Wilson and the Seattle Seahawks.

The Cleveland Browns have played and beaten two poor teams since getting roasted on the opening weekend by reigning MVP Lamar Jackson and the Baltimore Ravens. The Cincinnati Bengals and the Washington Football Team present vastly different challenges than Prescott’s versatile batch of offensive weapons.

Get all of BetQL’s best bets for the upcoming NFL season! Dating back a full calendar year, our five-star (max-value) bets have won 61% of the time! Go to BetQL.co.

The Dallas Cowboys have seen their offense click early under new head coach Mike McCarthy. With star running back Ezekiel Elliott signed to a freshly-inked mega-contract, Prescott playing under the franchise tag, and wide receiver Amari Cooper playing in a potential out year under his contract, the Cowboys look like they have much to prove. They’ve stumbled with costly errors throughout the first quarter of the season, causing many to believe “America’s Team” will be experiencing a disappointing version of deja vu in 2020.

Beyond their franchise tailback, Dallas failed to really get going in Week 1 against the Los Angeles Rams. They held the Cowboys offense to just two Elliott touchdowns and a field goal in an underwhelming 20-17 loss. They then struggled with turnovers at the beginning of a Week 2 tilt at the Atlanta Falcons, only to come back from a 20-point deficit and stun with a 40-39 win at the end of regulation. Last week, Prescott lost a quarterback duel with the hottest player in the NFL, Russell Wilson, as Dallas fell short at the Seattle Seahawks (38-31).

If you just look at the standings, you might be inclined to treat the visiting Cleveland Browns (+185) over the Cowboys in Week 4 as a smash play. Delve deeper and you will see that the odds should be much more in favor of Dallas this week.

iGamingPlayer has all you need to make the most informed sports wagers. Sign-up is quick and easy. Sign up below and join the crowd today!

As Prescott has shaken off the rust and also developed chemistry with rookie wide out CeeDee Lamb, he’s steadily improved his pass yardage. The quarterback tallied just 266 yards through the air in the disappointing Week 1 loss, but put up 450 in the Atlanta dazzler, and 472 in Seattle. He connected with seven different receivers in each of those games and completed at least four passes to six different receivers against the Seahawks.

The veteran Cooper has looked healthy and energized, collecting six catches for 100 yards against the Falcons, including nine catches for 86 yards against the Seahawks. Third-year receiver Michael Gallup has once again looked like a solid outside option thanks to his blazing speed and big play abilities. Tight end Dalton Schultz has come out of nowhere with sure hands and middle of the field play since he stepped up to replace Blake Jarwin.

The X-factor for this Cowboys team looks to be Lamb. Many pundits have surmised that the 21-year-old rookie out of Oklahoma might be the best receiver on this team right now, never mind the best receiver in the 2020 draft class. With 16 receptions on 21 targets for 230 total yards (through three games), that’s not as preposterous of a take as it first sounds. He has elite route-running ability, ball skills, toughness, and his explosiveness makes it easy to see why Dallas ignored knocks on his 4.51 40-yard dash at the NFL Combine. He seems polished and ready to pay immediate dividends for owner/general manager Jerry Jones’ gut decision to take him at 17 overall over defensive end K’Lavon Chaisson. Cowboys fans, rejoice: Jerry got this one right.

The Browns top offensive story in the first segment of the season has been the ever-improving backfield tandem of Nick Chubb and Kareem Hunt. Chubb has rushed for at least 108 yards and two scores in two of Cleveland’s first three games, averaging 5.7 yards per carry. Hunt has contributed 5.2 yards per tote and rushed for a touchdown while also grabbing 8-of-11 targets for two scores through the air.

While Cleveland’s running game has flourished, the play of quarterback Baker Mayfield has experienced some failure to launch. The third-year Oklahoma product (and college teammate of Lamb) has only gained 6.6 yards per pass attempt and 188 passing yards per game. He ranks 28th among quarterbacks in total passing yards (564) and completion percentage (62.4 percent), just above the winless Sam Darnold and the bench-shamed Mitch Trubisky. He only has 53 completions and a mere six plays of 20 yards or more.

That’s not ideal when you have Odell Beckham Jr. and Jarvis Landry out wide. Landry has failed to pick up where he left off in his Pro Bowl 2019 campaign, hauling in only 12 catches for 143 yards through three games. It’s not his fault—he’s caught all but one of his targets, but Mayfield hasn’t thrown him more than six passes in a game all year. Similarly, the veteran Beckham had 10 targets in the Week 1 drubbing by the Baltimore Ravens, but only six in each of the last two weeks. He’s tallied 11 catches for 155 yards and a touchdown.

After competing with the aerial assaults of Matt Ryan’s Atlanta Falcons and Russell Wilson’s Seahawks, out-dueling Mayfield and the Browns should be a relatively easy task for Prescott. The injury-plagued Cowboys defense will likely rebound a bit from consecutive 30+ point scoring allowances, too, welcoming Cleveland’s tepid passing approach.

If the front seven can contain Chubb and Hunt, it’s going to be a long day for the Browns, and the former-Oklahoma player who laughs last will more than likely be a Lamb, not Mayfield. Grab the Cowboys on the moneyline (-225).

Can You Boost Your L

Come Get Your MLB Pl