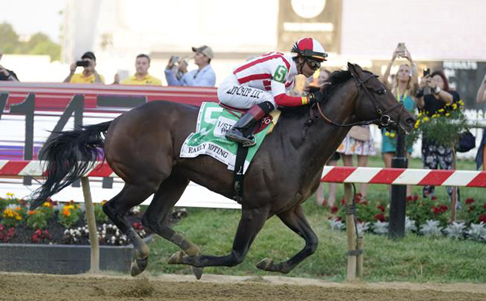 How did Early Voting win the Preakness Stakes? Our horse racing writer breaks down his winning path to victory.

But not the only thing. It was the horrible trips from the two favorites: Epicenter and Secret Oath. That’s what gave trainer Chad Brown and owner/chief Brown client/good friend Seth Klarman their second Preakness title in five years.

Take a trip into to the Wayback Machine—a la Biff from “Back to the Future 2”—taking the playbook from that 2017 Preakness win with Cloud Computing and copy/pasting it with Early Voting.

It was all of the above. 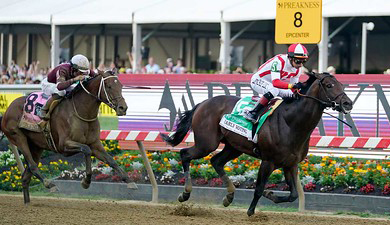 Early Voting’s 1 ¼-length victory over a snake-bit Epicenter was clearly a product of Pimlico’s obvious speed bias Saturday. Horses vaulting to leads or staying near the lead that day enjoyed a clear advantage over stalkers and closers. And that’s exactly what Early Voting did.

He let front-end 18-1 long shot Armagnac carry the water over slow fractions of 24.32 seconds (quarter-mile) and 47.44 (half-mile). Right when the pair hit the far turn of the 1 3/16-mile race, Jose Ortiz aboard Early Voting had seen enough. He asked and Early Voting answered, sling-shotting around Armagnac and opening up a 3 ½-length lead by mid-stretch.

Except Early Voting’s victory was a product of Epicenter’s nightmarish trip for 8 ½ of the 9 ½ furlongs. The Kentucky Derby runner-up compounded a slow start by becoming a long shot sandwiched between Skippylongstocking and Armagnac. From there, Epicenter and Joel Rosario couldn’t find any space, getting cut off by Skippylongstocking and Happy Jack. He was eighth out of nine going into the first turn.

This set Steve Asmussen off. The Hall of Fame trainer knew he had the best horse. He knew he had the most versatile, a colt who could win from the front, as a presser and even as a stalker. The bettors thought he was the best horse, sending him off at 6-5. But Epicenter and Joel Rosario, the Eclipse Award-winning jockey from 2021, dug too deep a hole. This presser-stalker wasn’t going to close on a day like this.

And Asmussen was beside himself. Losing the Kentucky Derby to an 80-1 shot like Rich Strike in the last 50 yards was bad enough. Losing the Preakness for the second consecutive year; pace-setter Midnight Bourbon finished second to stalking Rombauer, was too much.

“He just left him way too much to do,” Asmussen said about Rosario. “You’ve got to leave the gates. They go 24-and-1 (seconds). If you don’t leave the gates, you get one option. First time by, and you saw where he was, he just had too much to overcome to be right at a length at the wire—giving too much away.

“I was past surprised. I was disappointed. You’ve got to leave the gates to have any position whatsoever. When they throw up 24-and-1, and you’re that far back with a horse that obviously has pace, he just gave him too much to do.” 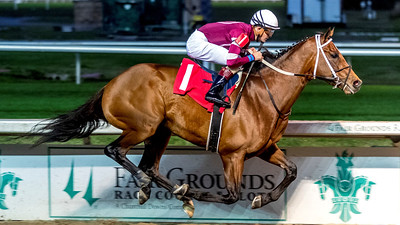 If it was possible, Secret Oath, the 5/1 second favorite, endured a worse trip. En route to her fourth-place finish, the filly got cut off by Happy Jack in the opening sixteenth before Luis Saez took her wide in the backstretch. By then, she was last of nine: 9 ¼ lengths back after a half-mile. She lost more ground going four-wide at the five-eighths post, then went five-wide around the final turn.

That cost the Kentucky Oaks winner distance—along with probably a shot at hitting the board. She had nothing left over the final furlong.

“She broke the way she was supposed to, but everyone was all over the place,” Saez said. “At the half-mile pole, she made her move, but when we came to the top of the stretch, the winner just kept going. It was a tough race.” 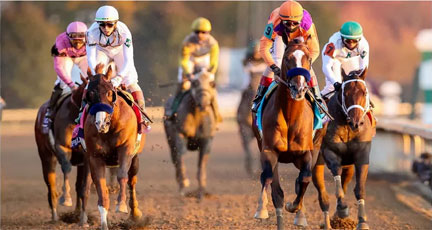 He showed it with Early Voting. The Grade 3 Withers Stakes winner and runner-up in the Grade 2 Wood Memorial—where he lost by a head to closer Mo Donegal—Early Voting had enough points to earn a gate spot in the Kentucky Derby. But Brown couldn’t stomach the idea of lightly raced Early Voting with his three career races and front-end speed coping with the 20-horse Derby chaos.

So he held Early Voting out of the Derby. Not that Brown hadn’t been down this path before. This was exactly what Brown and Klarman did with Cloud Computing. After he finished third in the 2017 Wood Memorial, Brown shelved him for that year’s Derby, then sent him out at the Preakness at 13-1. Cloud Computing coded his way to a head victory over Classic Empire.

“This horse, he’s better with a target,” Brown said. “I think when we ran him in the Wood, he was waiting on horses when he got to the lane. It’s not because he can’t go that far. So, I was hoping for a target, (that) somebody would send. Given the way the track was playing all day, very speed favoring, I certainly wasn’t going to take him out of high game. So, we were prepared to go to the lead. But when the other horse (Armagnac) went to the front, Jose got a good position with a target in front of him. I felt very good on the backside.”

“You know how hard it is. When you’re training horses, oftentimes, plans don’t work. Things happen.”

What’s happening next for Early Voting isn’t the Belmont. You’ll likely see him next in July at either the Grade 2 Jim Dandy at Saratoga or the Grade 1 Haskell Stakes at Monmouth Park. But you’ll see him as one of the 3-year-olds to watch going forward.

Join BetMGM’s Money Monday Club for a weekly free $10 bet. Must place a total of $50 in qualifying wagers in the previous week.