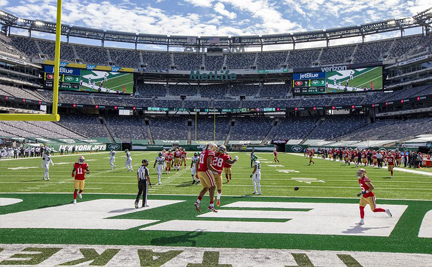 Which NFL teams will dominate in Week 3? Smart sports fans will hammer these lines before early bettors do.

The San Francisco 49ers reached the Super Bowl last season, returned most of the same core on both sides of the ball, and have one of the most complete rosters in the NFC, although they’re now struggling with injuries. Even though they lost running back Raheem Mostert to injury against the New York Jets last Sunday, they still ran wild on them to the tune of a 31-13 victory.

The Giants don’t represent much of a challenge, and just lost Saquon Barkley for the entire season with a torn ACL, meaning second-year signal-caller Daniel Jones will have to carry the team offensively from now on. That’s not a good sign against the more-than-capable 49ers secondary. The Giants should improve their scoring figures compared to what they did against the Jets, and there’s a good chance this game is virtually over by halftime, allowing the Giants the chance to score garbage points. Consider taking the over in this one. 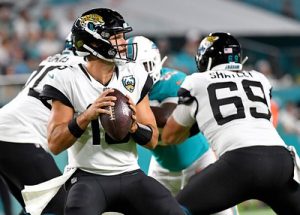 The Jacksonville Jaguars have scored at least 27 points in their first two games of the season, which is a good sign considering the team’s identity still lies on the defensive side of the ball. However, Gardner Minshew II has been nearly flawless in the first two games and he’s bound to regress at some point—something that already happened at times against the Tennessee Titans in Week 2.

Meanwhile, the Miami Dolphins have scored 39 points combined in their first two games of the season and might struggle when facing a Jaguars defense that already posed quite a few problems to both Ryan Fitzpatrick and Philip Rivers. As things stand now, the Jaguars are likely to win, but the poor quality on both offenses might lead to this one being a low-scoring contest.

The Kansas City Chiefs have Patrick Mahomes running the show on offense and feature an immense amount of weapons, such as Tyreek Hill, Travis Kelce, Sammy Watkins, and Clyde Edwards-Helaire, just to name a few. The Baltimore Ravens aren’t too shabby on that side of the ball, either, with reigning MVP Lamar Jackson, star tight end Mark Andrews, and running backs Mark Ingram and J.K. Dobbins as reliable pieces.

Baltimore has already scored 73 points in their first two games of the season, while Kansas City has scored 57 points—these are two of the three more prolific offenses in the AFC after the first two weeks of the season. Given the amount of offensive talent on both teams, this game could easily end in a shootout—just like what happened in Week 3 last season, when the Chiefs topped the Ravens 33-28. This is likely to be another high-scoring affair between two of the best teams in the NFL.

Blast Off with 2 Exp