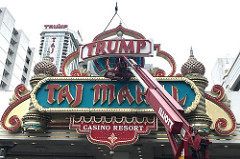 The online auction site eBay has stepped in and stopped the sale of a Large “Trump” sign recently removed from the closed Trump Taj Mahal casino in Atlantic City.

The sale was stopped since there is a dispute over who actually owns the sign.

“We have removed the listing pending the results of a law-enforcement investigation,” Ryan Moore senior manager of global corporate affairs & communications for eBay told the Press of Atlantic City.

Workers began removing all signage that bears President Trump’s name from the casino earlier this month. Trump no longer has an interest in the property, but had leased his brand to the property. However, Trump reached an agreement that the property had to be maintained to his brand’s standards or his name be removed. Since the property is now closed, the signs are being removed.

It’s not clear if the post offering the sign was legitimate, but it had drawn a top bid of $7,500, the Press said.