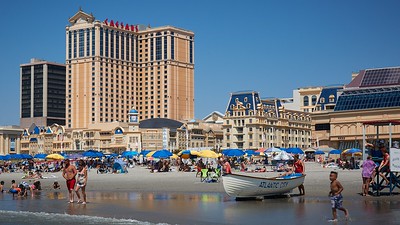 The acquisition of Caesars Entertainment by Eldorado Resorts Inc. has created the largest casino company in the U.S. The deal also brings three casino resorts under the new Caesars brand in Atlantic City, plus one under a new owner. The deal making could be a boon for the local landscape.

The dynamics go back to the early years of casino gaming in Atlantic City. In a move to placate shareholders, Company A buys Company B.

It’s how Caesars and Harrah’s ended up with a resumé of different owners over the years. The latest iteration of this formula brings Caesars, Harrah’s and Tropicana into the bosom of Eldorado Resorts Inc.; even if the Caesars name stands out front.

The $17.3 billion cash-and-stock merger of Eldorado and Caesars Entertainment Corp. creates the largest U.S. casino operator, with more than 50 casinos in 16 states.

And like many of the past acquisitions, the deal which requires Eldorado to invest in its new toys, including those in Atlantic City. The investment means properties don’t languish, but flourish. Under the terms of the merger, Eldorado must invest $400 million in its Atlantic City properties, $125 million more if the sale of Bally’s to Twin River falls through.

“The biggest benefit of the merger is the commitment to invest in Atlantic City and renovate the existing casinos,” Jane F. Bokunewicz, PhD, institute coordinator, of the Lloyd D. Levenson Institute of Gaming, Hospitality & Tourism, told GGB News. If Eldorado preserves the unique brand identify of each property, Atlantic City will still have diversity to attract visitors of all market segments, she said.

The development budget is not chicken feed.

The Quarter at Tropicana, the retail dining and entertainment complex plus 500-room hotel tower, cost $280 million. Harrah’s convention center was built for $126 million. Both projects created competitive advantages for the individual properties but also grew visitation to the city by attracting more conventions to Harrah’s and new demographics of customers to the Tropicana.

“I would allocate most of the $400 million Eldorado has pledged to renovating Caesars. Its name has strong brand recognition, but the property has not been renovated as recently as Tropicana or Harrah’s,” Bokunewicz said.

Plus it shows signs of neglect. And the center boardwalk location doesn’t hurt.

While Caesars has always had regional market strength, its franchise is now expanded for customers within their Rewards program throughout Eldorado’s landscape. “At the same time other jurisdictions have benefitted from property sell offs by Eldorado through the merger which allows other operators to buy-in and add their brand creativity,” Ambrose said.

Caesars has outlined their upgrades publicly in terms of refreshed hotel rooms, review of gaming products and improved floor layouts, additional dining options as well as enhanced entertainment options, Ambrose said. “I am sure like any new owner all areas of each property are being scrutinized, in both front and back of the house,” he said.

The timing works well for all upgrades since properties have limited capacity requirements because of the Covid-19 pandemic.  “Also, with the protocols impacting present and future interior designs for all parts of the ‘customer touch-points,’ this will surely be reviewed in the process,” Ambrose said.

Mergers also bring new management leadership and fresh points of view to a market place, he said. “Diversity of ownership in a market this size is a plus.  It brings creativity and competition and a more strategic marketable environment where there are just more benefits for the customer.”

On the flip side, growth is often stifled when a single owner controls multiple properties, said Ambrose, a former casino executive.

The state Casino Control Commission at the last minute dropped a recommendation by the Division of Gaming Enforcement that Caesars also be required to remove deed restrictions on former properties Showboat, Coleridge and Atlantic Club.

In general, deed restrictions of any kind interfere with investors’ ability to create an innovative product, Bokunewicz said. “Investors may hesitate to purchase a property with restrictions which may be one reason why the Atlantic Club has been idle for so long. Competition works best when property owners are free to develop their vision for the property they have purchased.”

Ambrose is in agreement, but said, ”With the current pandemic situation and lack of market growth in Atlantic City, it may be a blessing in disguise. The resort doesn’t need more casinos, but rather diversity in ownership of the present properties, which we’re seeing.”

A market the size of Atlantic City can only support so many casino operations, he said.

Throughout New Jersey, online casino revenue in July surpassed $2 billion since its 2013 introduction. Sportsbooks posted the best month since the pre-pandemic February. Indeed, with baseball and the NBA resuming their seasons and the casinos re-opening, July marked a return to normalcy to an extent, according to PlayNJ.com analysts.

The state’s online and retail sportsbooks brought in $315.1 million in July, up 25.3 percent from July 2019 and up 91 percent from June, based on official figures released by the Division of Gaming Enforcement August 12. Gross revenue rose 65.2 percent in July to $29.6 million. The win produced $3.7 million in state taxes.

Sportsbooks did well, but the shutdown of major sports cost New Jersey books about $1.6 billion in bets. “August should be an unusually busy month for sports betting, and that will help make up a bit of the lost wagers,” said Eric Ramsey, analyst for PlayNJ.com. “The leagues have to stay healthy, though, or we will be right back to where we started.”

Online sportsbooks took in 93.9 percent of the state’s July handle. The Meadowlands led the market with $1.9 million in July. July’s $87.5 million in online casino and poker revenue was up 122.5 percent from July 2019 and topped the $85.9 million revenue record set in May.

Total gaming revenue fell 23 percent to $248.7 million compared to July 2019. Casino win—revenue generated from slot machines and table games—finished at $147.4 million, down from $277 million reported during the same month in 2019, according to the Press of Atlantic City.

Adding in the race tracks, and the industry won $264.5 million in July, a decrease of almost 21 percent from July 2019. After paying out winning bets, the Meadowlands Racetrack in East Rutherford made $14 million in sports betting revenue in July, up from $9 million a year earlier. Monmouth Park Racetrack in Oceanport made nearly $1.7 million, down from $1.9 million a year earlier, according to the Associated Press.

Casino Control Commission Chairman James Plousis sounded an optimistic note. “Visitors are again enjoying the playground by the sea that is Atlantic City,” he said. “While public health remains a concern, the tourism and gaming sector has started on the road to recovery.”

Ocean Casino Resort was the only one to have an increase in casino win. Its $23.6 million increased 23.1 percent over last year. Hard Rock Hotel & Casino Atlantic City took in $24.6 million, the industry leader.

Ocean CEO Terry Glebocki said last month’s results are “indicative of the momentum Ocean has created,” and credited her team’s ability to work within the state’s restrictions. “We’ve been continually adapting and expanding our offerings, staying within state protocols, to offer our guests the experience they deserve.”

For the first seven months of 2020, the casinos and tracks have made nearly $1.3 billion in revenue, down a third from the $1.9 billion.